Ten years now and closing in on $100,000 raised for Alzheimer’s research and Joan Clarke knows her mission is nowhere near complete.
It’s been 12 years since Alzheimer’s claimed Clarke’s husband.
And for the past decade she’s used the Santa Market Craft Show to honor his memory and push the needle forward on Alzheimer’s research.
“Our family has taken to do this as a positive response to a horrific disease,” Clarke said recently on the anniversary of her husband’s death. “The kids work. The spouses work. Even the grandkids work handing out bags.”
“For us it helps. I like to hope we’re helping other people and making a difference.”
It’s estimated that every 65 seconds another person learns they have the terminal condition which robs them of their identities.
While the disease keeps growing – now registering as the sixth-leading cause of death in the United States – the support for the Santa Market Craft Show benefiting Alzheimer’s research is booming.
LONG TIME COMING
For the past nine years the Santa Market has been housed in the Downtown Edmond Community Center.
The show proudly boasted 18 vendor tables that first year.
“We were just a little show trying to get started,” said Clarke, who organizes the event with daughter Megan Nye and Megan’s mother-in-law Molly.
Last year the event took up the entire upstairs, downstairs and – with 101 vendors – poured onto the lawn of the community center in Edmond.
According to the family’s best estimates some 4,000 people attended last year’s market, which focuses on hand-made items perfect for holiday giving.
A new venue was a must so Clarke decided to “go big or go home” and booked space at the Oklahoma State Fairgrounds.
The Pavilion Building will host this year’s Santa Market Craft Show on November 23 beginning at 9 a.m.
Sponsors have already responded, footing the bill for both admission and parking for attendees.
“We’ve never jumped the gun. We’ve steadily progressed,” Clarke says. “We’ve steadily gotten more sponsors, steadily gotten more people involved and raised more money each year.”
“I feel like we’re paced ourselves really well.”
The steady growth has resulted in some $93,000 raised for Alzheimer’s research. Clarke said the event has already raised $4,000 in sponsorship including Diamond Level Sponsorship by Oklahoma’s Senior News and Living.
By the end of October Clarke already had commitments from 190 vendors scheduled to fill 270 10×10 booths.
From three people running a craft show raising $3,000 in its first year to a year-round, 501(c)3 organization that earned $23,000 for Alzheimer’s last year the Santa Market continues to grow.
A silent auction featuring items like Kendra Scott jewelry to a weekend package at Lake Texhoma serve as top earners.
“We are extremely blessed,” Clarke said. “We get help from so many people. It just never ceases to amaze me. People want to help. They want to donate. They want to be involved.”
“Literally, it’s not just a craft show it’s so many people getting on board with us.”
STAGGERING NUMBERS
The number of Americans living with Alzheimer’s is growing — and growing fast. According to the Alzheimer’s Association, an estimated 5.8 million Americans of all ages have Alzheimer’s.
This number includes an estimated 5.6 million people age 65 and older and approximately 200,000 individuals under age 65 who have younger-onset Alzheimer’s.
* One in 10 people age 65 and older (10 percent) has Alzheimer’s dementia.
* Almost two-thirds of Americans with Alzheimer’s are women.
* Older African-Americans are about twice as likely to have Alzheimer’s or other dementias as older whites.
* Hispanics are about one and one-half times as likely to have Alzheimer’s or other dementias as older whites.
As the number of older Americans grows rapidly, so too will the number of new and existing cases of Alzheimer’s. By 2050, the number of people age 65 and older with Alzheimer’s dementia may grow to a projected 13.8 million, barring the development of medical breakthroughs to prevent, slow or cure Alzheimer’s disease.
It’s been 12 years since Clarke’s husband has passed and his memory this time of year is even stronger.
“You would think you would get good at these things but you don’t,” Clarke said, wiping back tears. “This never ever stops for us.” 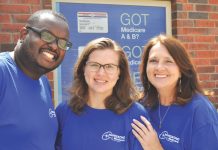 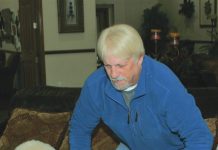 Service Dogs Can Aid With Aging in Place 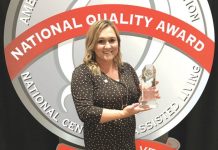