Gabe Renfrow isn’t afraid of taking on life challenges, and says his approach running for public office is no different.
Renfrow, who works as a Registered Nurse at the Oklahoma Heart Institute in Tulsa, is running as a Republican candidate for Oklahoma House District 66, which encompasses Tulsa and Osage counties.
A Sand Springs resident, Renfrow will face Mike Burdge, Wayne Hill, and Clay Staires in the June 28 Republican primary vying to replace Rep. Jadine Nollan, who is term-limited. A run-off, if necessary, will be held Aug. 23, with the winner taking on Democrat James David Rankin in the Nov. 8 general election.
“I like challenges,” Renfrow said. “I am not one to back down from any life challenge whether it is a job or kids.”
A 15-year veteran of a cardiovascular catheterization lab, Renfrow previously worked as an emergency medical technician. He is a graduate of Northeastern State University and Bacone College.
Renfrow’s campaign platform includes; fighting for election integrity, defeat illegal immigration, support a parent’s right to choose, and rejecting government mandates.
Renfrow said the birth of his children helped inspire him to serve a greater good as a lawmaker.
“My daughter was born seven years ago, and I felt like I needed to be a voice to make sure she had what she needed to be successful in this state,” he said. “It just snowballed from there. People are looking for somebody to do a good job, and make sure that their thoughts and feelings are heard at the state level. It is like being an advocate for a patient. You are an advocate for the people of your district, and for the state of Oklahoma.”
Renfrow has been campaigning since last fall.
“It (campaign) has been really positive,” he said. “I have been campaigning since last September. I have probably knocked on close to 6,000 doors. It has been a real eye-opening thing for me. I learned a lot about myself doing it.”
Renfrow said if elected, will work part-time at the hospital. The Oklahoma Legislature meets in session every February through May in Oklahoma City.
“When the (legislative) session is out, I will be at the hospital,” he said.
Renfrow said nursing has long been a calling for him to do.
“It (nursing) is something that I always wanted to do,” he said. “I was in medical sales in Missouri, and I had this feeling that I wanted to be closer to the patient instead of in sales. I worked for a company doing orthopedic sales. I felt there was something more that I could do, so I decided to go to nursing school.”
Renfrow’s career direction was also influenced by an experience while doing clinicals in Tahlequah.
“I was in clinicals in Tahlequah, and they have a small Cath lab there,” he said. “They had an emergency patient come in, and he was basically dying. I was standing against the wall watching everything happen, and the guy went from grey to blue. They opened up the vessel, and he instantly changed colors and his breathing was better. That was something (to see). It was a very exciting moment. I thought this is what I want to do with my career. Saving someone’s life is the best part of what I do. When you get to be a part of that, it is why you do the job.”
Renfrow is married to his wife Gini, who is a nurse practitioner. The couple has two children, Sadie, 7, and Monroe, 4.
Renfrow said having a spouse who also works in the medical field, is beneficial for both of them.
“She is absolutely amazing,” he said. “I tell people she is a much smarter person than I am. We bounce things off of each other all the time.”
As a teenager, Renfrow cleaned churches at 4 a.m. before school to afford food and clothes. That experience helped instill in him a strong work ethic.
Renfrow said he still enjoys coming to work each day at the hospital.
“I have been doing it for 15 years, and I don’t think I have had a burnout day yet,” he said. “There are days when I sit and think and pray about what I have dealt with that day. Most of the time, I can wash it off my back and come home and enjoy my wife and children, and know that I did the best that I could for the patients that I had that day.”
To support Gabe Renfrow visit: https://gaberenfrow.com/ 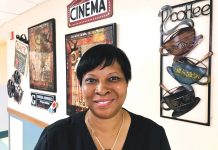 A CALLING IN LIFE: LPN LEARNS FROM PERSONAL EXPERIENCE