Heritage Assisted Living has been in Curtis Aduddell’s family for 17 years.
The director realizes when he comes to work every day he’s walking into someone’s home.
He’s proud of that. And walk the halls of the Yukon residence for a few minutes and you’ll quickly see he’s not the only one.
“More laughter going on here than any other facility around, I’ll bet you,” said resident Jane Carter.
“We do have fun,” resident Ron Kirby chimed in. “It’s the reason to live. That’s what it’s all about. When you’re happy you live longer.”
There’s life in these hallways.
The sound of people laughing.
The smell of chicken enchilada soup simmering on the stove in preparation for dinner.
FAMILY DIFFERENCE
Aduddell became a nursing home administrator in 1993 in Texas. When the opportunity arose to move back to Oklahoma he jumped on it.
His brother and father approached him with a plan to open several assisted living facilities. The family built Heritage Assisted Living from the ground up and Aduddell has been at 9025 Northwest Expressway ever since.
Joan Dark’s residence is just 10 feet down the hall from Aduddell’s office.
His door is alway open, usually with Chief Canine Officer Cotton’s head poking out. Aduddell’s affectionate, gentle and patient Great Pyrenees knows every resident by sight and visits with them on a daily basis.
In 2015, Dark sold her house and moved into independent living. Less than a year later she realized the move didn’t solve the day-to-day chores of cleaning, cooking and shopping.
A friend suggested Heritage Assisted Living.
“I love it here,” Dark said.
And one of the things she loves is the access she has to the man in charge.
She’s used that access on a couple occasions but mostly she pops in just to say hello.
“A lot of people like the fact they can go to somebody that can at least give them an answer. Whether the answer is yes, no, this that or the other you don’t have to run it up a corporate chain of command,” Aduddell said.
“We do it because we love the seniors and we love what we do. That’s my goal. Open door – absolutely.”
SMOOTH TRANSITION
The open door policy is just one of the amenities new residents are offered when Director of Admissions Kimberly Brinner begins the discussion of moving in.
“We get a lot of information before people come in and find out their likes and dislikes,” Brinner said. “We try to pair them up with someone here who is very similar.”
From that information a myriad of things begin to fall into place.
“They feel comfortable. They know there are people they can go to talk to over and over again,” Brinner said. “We know this is going to be hard. The first six weeks are always bumpy, no matter wherever they go.”
“But it’s bumpy because their entire world has just turned upside down. We want to make sure during that time we’re here for them 100 percent.”
That’s where the hospitality committee comes in. Sharing stories, memories, tips and feelings of their own personal transitions oftentimes brings it home to people that they don’t have to go through this phase alone.
Residents are encouraged to take ownership at Heritage. Whether it be serving on resident committees or leading in other ways the message is clear: Heritage is your home.
“We work here. You live here,” Brinner said. “We’re working in your home. We want to know what you want us to do in your home. We don’t want to cross that line when we’re in your home. You tell us what you need us to do to make your life better.”
“The thing I always stress is that we’re a family-owned facility but we’re a family here. My mom lives here.”
Dinnertime is a special time at Heritage – largely because it’s driven by what residents want.
The food council meets monthly with Chef Felipe Castillo to help craft the menu.
Special requests are made and family recipes are shared with Castillo so he can share with everyone.
A few years back, residents even opted to restructure dining times and implement reserved seating.
“They wanted that. It’s not for our benefit,” Aduddell laughed. “They wanted it to get to know the people at their table.”
Remodeling has already begun at Heritage. A bistro will open along with a workout facility. More open reading areas will be offered.
Granite countertops and new flooring are also being installed.
Staff longevity reigns at Heritage. Director of Nursing Jodie Spradlin has several night staff that have worked at Heritage for 17 years.
Many others are reaching a decade of service to residents.
“People come and stay,” Aduddell said. “We just try to hire caring and compassionate people. I think we’ve done a good job in that.”
They’ve also done a good job of making a home.
To find out more information you can call Brinner at 405-470-4249 or go online to
www.heritageokc.com. 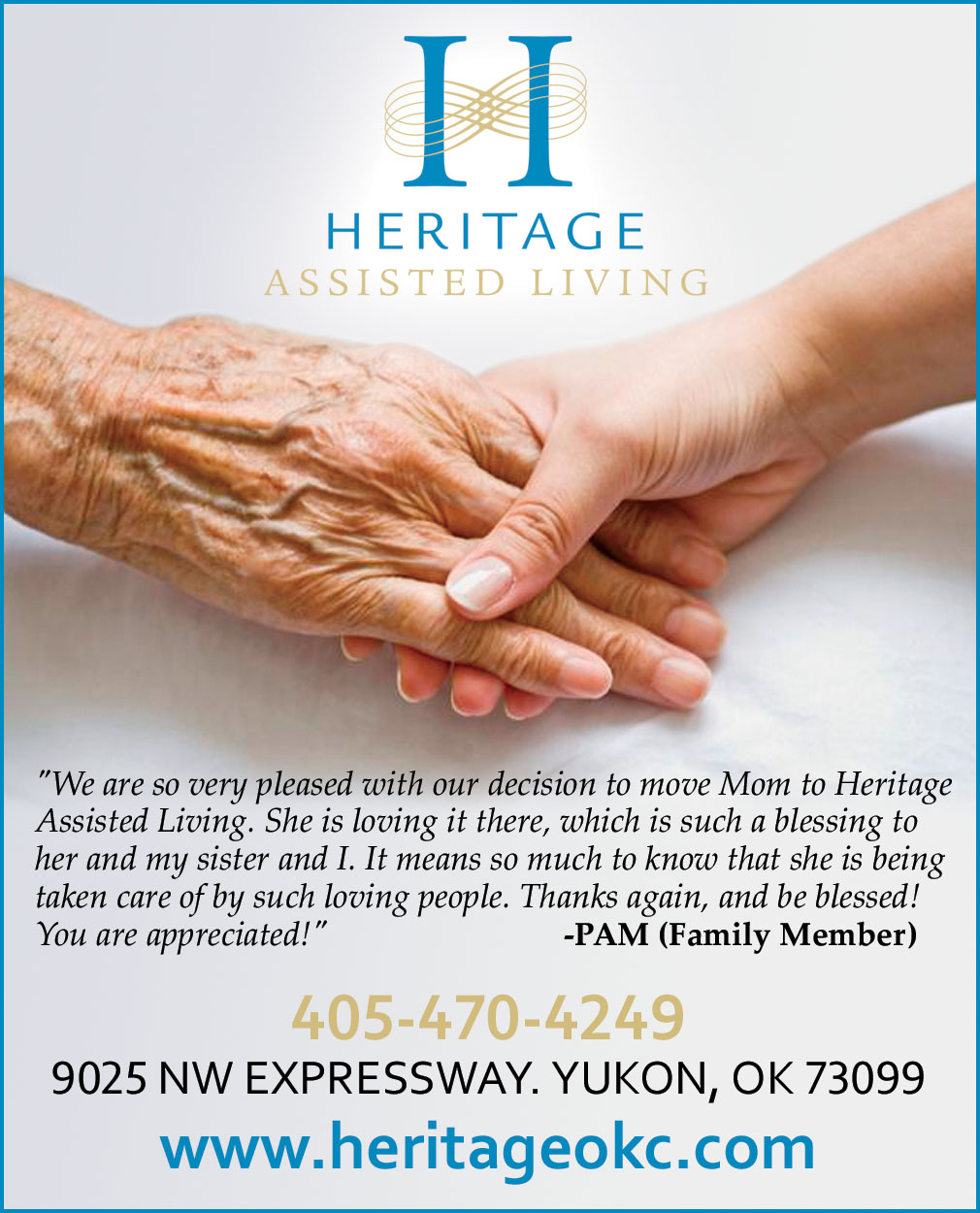