Weeks of political wrangling at the Oklahoma Legislature in November put the immediate future of 20,000 Oklahoma seniors in jeopardy with only a temporary fix agreed upon as the year draws to a close.
In mid-November the ADvantage Waiver program, designed to help them live at home instead of a nursing home faced elimination. By the end of the month a temporary reprieve was granted with the program’s future still uncertain in 2018.
Melissa Holland serves as the executive director of the Oklahoma Assisted Living Association.
She says her phone rang off the hook throughout the legislature’s special session.
“It shouldn’t have come to this point,” Holland said of the 11th-hour reprieve the waiver program received from Gov. Mary Fallin.
ADVANTAGE WAIVER
Financially, the ADvantage Waiver requires that applicants qualify for Oklahoma’s Institutional Medicaid known as SoonerCare.
The SoonerCare income limit for long term care services for a single applicant is $2,205 per month. The countable resources limit is $2,000.
Holland points out the program is actually a federal one through the Centers for Medicare and Medicaid Services. Which means it was funded through taxes paid into Social Security.
“So Oklahoma receives funds for that and they should be disbursing accordingly,” Holland said. “The funds come from CMS.”
After learning of the Oklahoma Legislature’s intent to short the Oklahoma Department of Human Services $69 million in funding for the next fiscal year, DHS sent out a letter in October announcing that the ADvantage Waiver program would end Nov. 30.
The move would cover $39.44 million of the department’s $69 million funding shortfall.
State Rep. Pat Ownbey, chairman of the House Human Services Committee, said he believes the program will survive.
“The intent of the Legislature is not to allow the ADvantage Waiver program to be cut,” he said. “It’s not going to happen. … We will get that (budget) hole filled.”
Even though DHS was required by law to notify recipients of the impending cut it was criticized by legislators for fear mongering.
“What’s interesting was I started fielding calls from seniors that needed to go into communities that were looking for long-term care options and they had nowhere to go,” Holland said.
One of Holland’s members had to send out 26 eviction notices in one day. A pharmacy service called and said it would be forced to lay off employees.
“The thing is these residents, these seniors, have paid that to society,” Holland said. “Some are veterans. Most have worked hard and they deserve this. They’ve paid into the system and this is basically their money that should be coming back to them from the government from the taxes they’ve paid.”
“They’re not people who have never worked or are trying to live off the system.”
The program faced elimination in the new budget sent to Fallin’s desk.
But Fallin struck down all but five of the 170 sections of the budget plan. The measure did ensure the ADvantage program would be funded until January.
“House Bill 1019X does not provide a long-term solution to the re-occurring budget deficits, and within three months we will come back facing an estimated $600 million shortfall,” she said.
“This will preserve a safety net for core health and human services until legislators come back for a second special session, which I intend to call in the near future,” said Fallin.
Fallin said she vetoed most of HB 1019X because it came perilously close to using most of the state’s available one-time funds in various accounts and drawing down on available savings in the Rainy Day Fund. Signing the measure would have left the state with few available funds to deal with an estimated shortfall of more than $600 million in the next regular legislative session, which begins in February.
Senior Joan Dark is an ADvantage program member who lives in a Yukon assisted living facility.
She was one of thousands of Oklahoma seniors who spent an anxious November waiting for news.
“I turn the news on and turn it back off. It’s not pleasant but I pray a lot,” Dark said. “I honestly don’t know. I just don’t know. I love it here. I just don’t want the legislature to close us down. I like the people, both the residents and the staff. They are so good to us.” 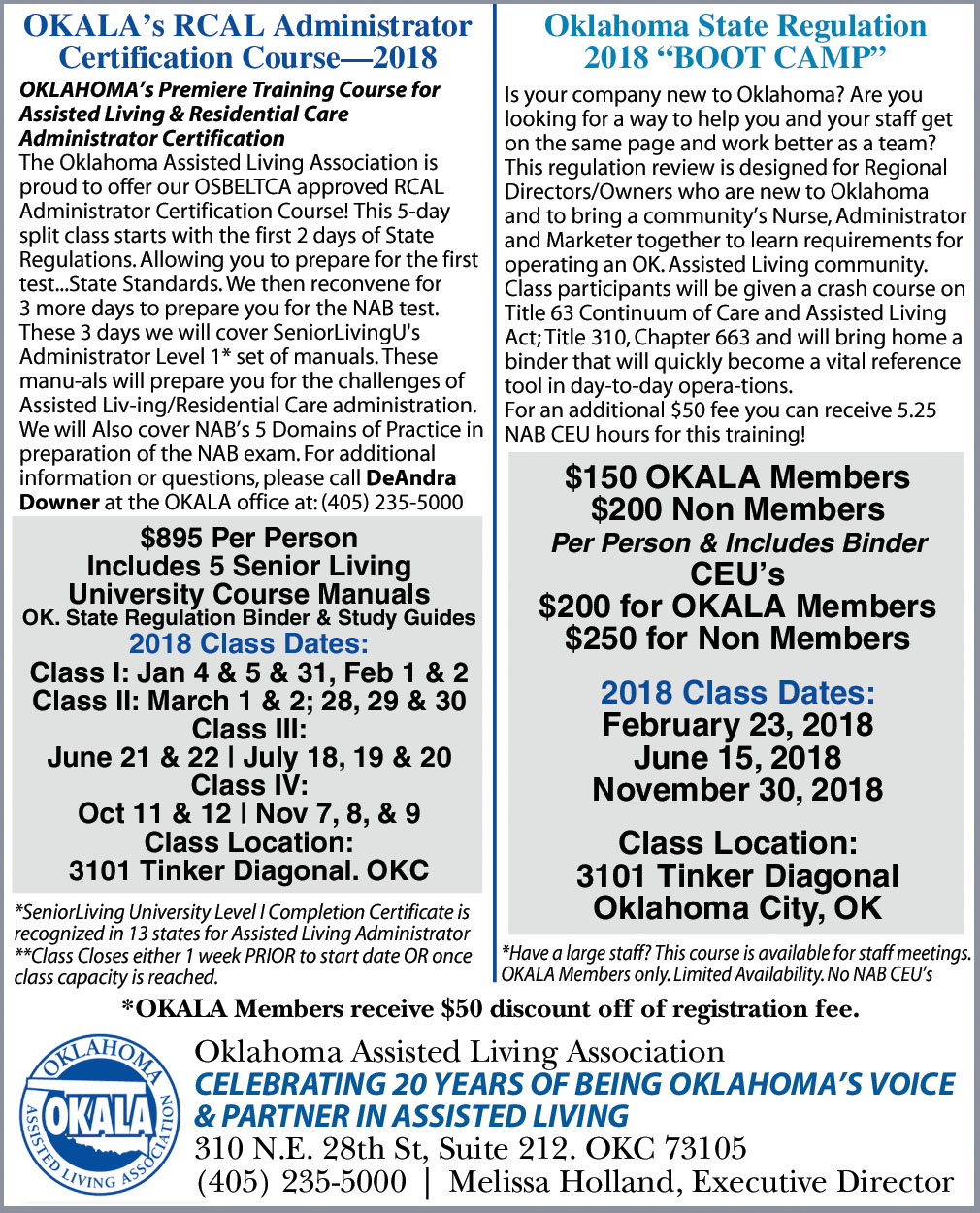