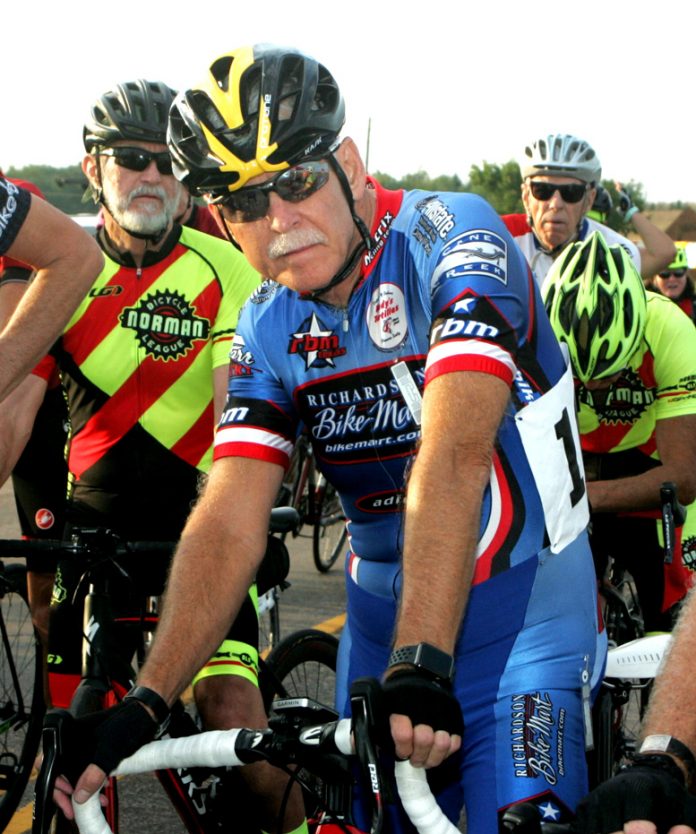 Oklahoma Senior Games cycling competitors gathered Sunday, September 16 last year at the Lake Stanley Draper Marina to stage for their either one lap or two lap races starting north around the lake. Many of the 55 cyclists who started racing at 8 a.m. in a mass start travelled from out of state to qualify for the 2019 National Senior Games in Albuquerque, New Mexico.
“Oklahoma offers many of these Texas riders racing today another chance to qualify for nationals,” said Kathleen Fitzgerald, OSG state director. “It is surprising at first, how far they will travel to qualify for nationals, until you talk to them and realize these are really competitive older folks who want to stay fit year-round as cyclists.”
The 22K and 44K road races drew the most contestants last year at Draper, while the 5K and 10K time trial events that started at noon and 1 p.m. saw many of the same road racers participate.
The 22K course, one clockwise lap around Draper, saw the group stay together. They finished almost together on the long downhill that sweeps from the south to the finish near the road that leads into the marina. Many of the racers continued for another lap around Draper to contest the 44K category.
The 40 and over bicycle racers were hoping to place first through fourth place at last year’s games so they could qualify for the 2019 National Senior Games in New Mexico. Those games just took place June 14-25.
Many of the same racers, trying to qualify for Nationals, lined up again at noon or 1 p.m. to start an individual 5K or 10K time trail on an out and back loop north on the lake road. The cyclists, many riding specialty time trial bikes, began their race against the clock in one-minute intervals. Starting order was from youngest to oldest starting with males and ending with females.
The events observed U.S.A Cycling rules and went off without any wrecks or mishaps throughout the day.
In the time trial events, riders were not allowed to draft (take pace behind another rider) closer than 25 meters ahead, or two meters to the side. If anyone had broken this rule, they would have received a time penalty.
Both road race distances and the two time trail distances offered dual opportunity for qualifying for nationals. Qualifying in any event at the 2018 event earned the athletes the right to compete in either or both their respective events at Nationals.
2019’s events for 40+ cyclists will take place Saturday, September 21 at the lake with a similar schedule as last year. Entry Deadline is September 7 this year and staging will again be at the marina at 8301 SE 104th. Street.
Divisions will be contested in recumbent, Paralympic Upright, Paralympic Handbike, Paralympic Tandem and Paralympic Tricycle if enough racers enter those categories,
Racers 40+ can go online to okseniorgames.com for more information or call (405) 821-1500.
In a recent article published by the Harvard Medical School’s Harvard Health online, bicycling is described as providing important physical benefits. First, it is an aerobic workout, which for seniors is the heart of any health plan, pun intended. Cycling, therefore, is good for their heart, brain and blood vessels.
Cycling is easy on joints, Dr. Safran Norton says in the article. He says that unlike walking, cycling is good for anyone with joint paint or age-related stiffness.
Bicyclists use their largest muscle group, the legs, which helps them build muscle while toning other muscles needed to keep them balanced and steer the bicycle.
These benefits carry over into everyday activities while helping cyclists build bone density, says Dr. Norton.
Greater Fort Lauderdale, Florida will host the 2021 National Senior Games, the largest multi-sport championship event in the world for adults 50 and over. More than 10,000 qualified athletes, accompanied by an estimated 15,000 visitors, are expected to compete in 20 medal sports in 2021.
The National Senior Games, begun in 1987, has 54 affiliated qualifying member games in North America promoting wellness and active, healthy lifestyles for older adults.