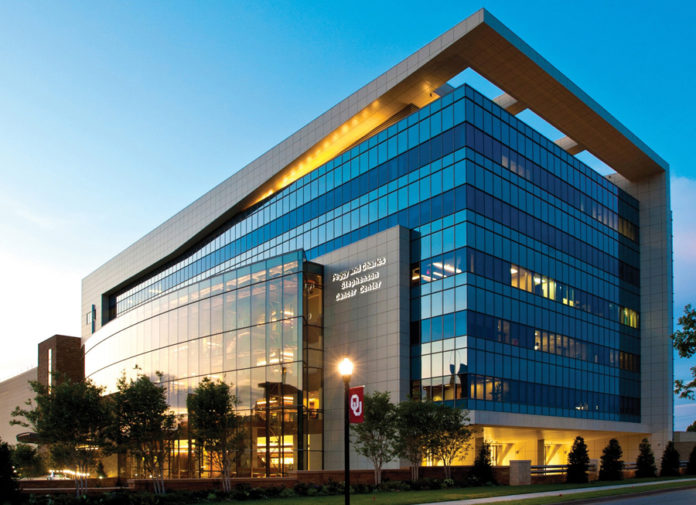 Stephenson Cancer Center at OU Medicine took part in an international clinical trial that proved the effectiveness of an oral medication for metastatic prostate cancer, the first treatment advance for that disease in many years.
Results of the trial, which studied the drug relugolix, were published in the prestigious New England Journal of Medicine. One of the lead authors is Michael Cookson, M.D., Stephenson Cancer Center urologic oncologist and chair of the Department of Urology in the OU College of Medicine.
The mainstay of treatment for metastatic prostate cancer is androgen deprivation therapy, also called hormonal therapy, in which a man’s testosterone level is lowered in order to put cancer cells into a state of remission. For many years, the therapy has been available only in the form of an injection, which sends a signal to the brain to shut down the production of testosterone. The new trial studying the oral drug relugolix showed the same ability to lower testosterone, perhaps even better, as well as a decrease in several side effects that occurred with the injection.
“Prostate cancer is the second-leading cause of cancer deaths among men,” Cookson said. “This study is exciting because it is the first trial to demonstrate that men can take a pill instead of having to go to the doctor’s office for shots, and the cancer control is just as effective. But there were several additional findings that are also positive.”
One of the trial’s bonus findings centers around how a man’s testosterone is lowered, Cookson said. Injections work by stimulating the pituitary gland so that there is initially a slight overproduction of testosterone before it starts to lower. That “flare” of testosterone after the injection delays the effectiveness of the therapy. However, the drug relugolix is able to tell the brain to stop producing testosterone immediately without a flare.
“In addition, because the pills directly send the message to stop testosterone production, they lowered the testosterone level faster than injections do, and kept it lower over the duration of the study,” Cookson said. “And perhaps even more interesting is that once men stopped taking the pill, their testosterone level rebounded fairly quickly, whereas men who received injections can take up to a year to go back to their normal testosterone levels.”
Another important finding of the trial was a decrease in cardiovascular side effects in men who received the oral drug vs. the injection. While cardiovascular side effects were not eliminated in men who took the pill, they were significantly lowered, Cookson said.
Stephenson Cancer Center was one of many centers around the world that collectively enrolled more than 900 men to the trial. The patients were randomized to receive either the injection or the oral drug, then their health was monitored for 48 weeks. The next, and final, step is to seek approval from the Food and Drug Administration to offer the drug relugolix to patients with metastatic prostate cancer.
Because Stephenson is a National Cancer Institute-Designated Cancer Center and one of the nation’s top enrollers in NCI clinical trials, it treats many men with metastatic prostate cancer, Cookson said.
“This clinical trial is part of our portfolio for men with this disease,” he said. “Our prostate cancer program is unique because it is truly multidisciplinary, offering the most advanced medical, surgical and radiation therapy treatments with access to clinical trials, all at the same center.”