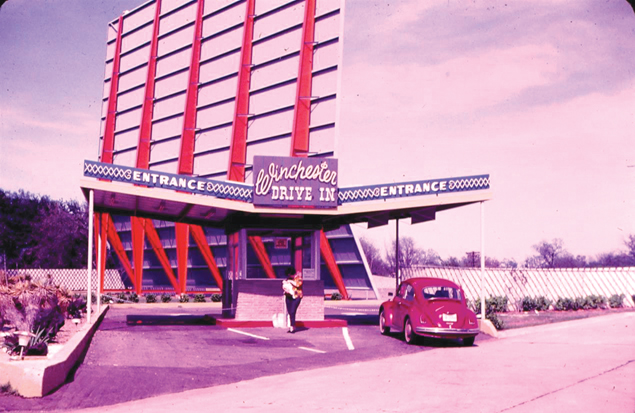 The movie theatre industry has been around for more than a century. And as the newest technology drives multiplex theatres and viewing experiences, Winchester Drive-In in Oklahoma CIty still delivers movies the way many of us grew up watching them.
There are some 305 drive-in theatres remaining in the U.S., according to the United Drive-In Theatre Owners Association.
Oklahoma has five.
Oklahoma City has one – the Winchester.
At the industry’s peak in 1958, there were 4,063 drive-in screens across the country. These days, California is one of the biggest players in the space, with 44 screens; only Pennsylvania (45) and New York (49) have more.
As May turned to June, the Winchester was showing one movie a day – Jurassic Park.
The story of a pragmatic paleontologist visiting an almost complete theme park debuted in 1993 but that didn’t seem to matter to those in attendance.
The Winchester Drive-In opened on July 3, 1968 with a triple bill program: Paul Newman in “Harry Frigg”, George Peppard in “PJ” & Lee Marvin in “Sergeant Ryker”.
Owner Lindy Shanbour was there to greet those first customers as he would do almost every night until he started having health problems.
He was able to hold on until the 50th anniversary season before he passed at age 91 as the season closed in November.
Today, the 53-foot waving, neon cowboy complete with mustache and rifle still greets customers as they drive up to the theatre
And manager Jeff Massad wouldn’t have it any other way.
“It’s a generational thing at this point. It opened July 3, 1968 so a lot of people were seven, eight or nine years-old and they’re bringing their grandkids now wanting them to enjoy what they loved when they were kids,” Massad said.
Back then customers hung a speaker on their car window to pipe in the sound. Today, moviegoers tune in to a Dolby digital channel on their car radio.
“It’s come a long way but it’s still nostalgic,” he said.
For the short term, Hollywood has told theatres not to expect any new releases until social distancing guidelines begin to ease.
But Winchester patrons are just happy to be out of the house and parked in front of the big screen on a weekend evening in south OKC.
June or July are anticipated for new releases but Massad is showing classic movies.
On a given night it takes about 20 people to staff the venerable drive-in.
He said he couldn’t imagine not having the theatre open.
Once Shanbour passed, the theatre remained in the family’s trust. As the trustee, Massad felt keeping the theatre going was just the right thing to do.
“There was no question,” Massad said. “I loved those guys. My dad died when I was young so they have kind of been father figures to me – first George, then Lindy.”
Growing up in the Lebanese community, Massad said the Shanbours were always there for him. And they were always there for the southside moviegoers.
It was indeed a labor of love.
“It’s a lot of work to get it ready,” Massad said. “We shut down typically in October or November. When it gets really cold and nasty weather people don’t want to sit outside and watch a movie.”
Opening generally occurs at the end of March or the first of April.
Covid 19 restrictions on gatherings pushed that until May this year.
Two weeks in May were spent repairing the neon sign. A typical Oklahoma spring night blew out much of the hard work.
“Traffic the first weekend was fantastic,” said Massad, noting only every other car spot in the 400-plus car lot is in use due to social distancing guidelines.
Massad says typical customers include those who live around the area. The second group is a devoted fan base that has always come regardless of where they call home.
“That’s a big group. We have about 50,000 fans on Facebook which is pretty amazing,” he said. “Our responses have been pretty fantastic.”
Drive-in theatres across the country are experiencing a resurgence.
“For me, being around the Shanbours for 30-years plus and helping, I just feel like I’m helping carry on their legacy they loved so much. It was something they adored, cared about and treated like their baby and I just felt like I wanted to help them continue that.”