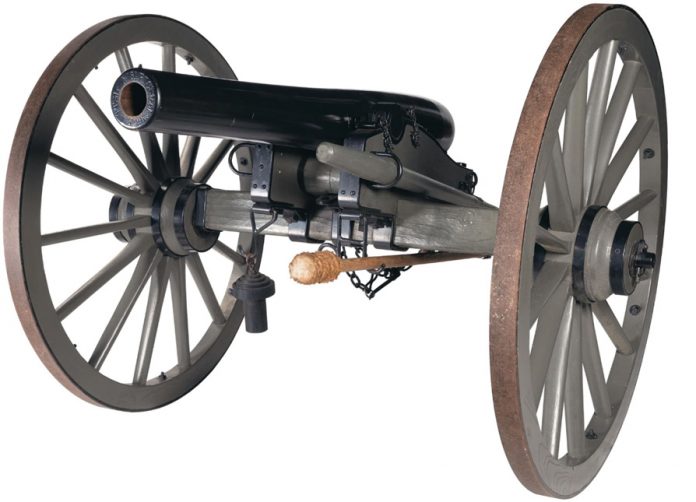 Since 1951 the cannon used by William “Buffalo Bill” Cody and Gordon W. “Pawnee Bill” Lillie in their Wild West Show has been on display at the Oklahoma Historical Society (OHS) headquarters in Oklahoma City. It was first displayed outside the original OHS building at 2100 N. Lincoln Blvd., and then at the new Oklahoma History Center at 800 Nazih Zuhdi Drive. After more than 70 years in Oklahoma City, the cannon will return to the Pawnee Bill Ranch and Museum in Pawnee.
According to Ronny Brown, the Pawnee Bill Ranch and Museum director, the Model 1861, 3-inch ordnance rifle was cast in 1863 at the Phoenix Iron Company in Phoenixville, Penn. The gun reportedly saw service in several Civil War battles, including Missionary Ridge, before Pawnee Bill acquired it for use in the Wild West Show. After the Wild West Show, the gun found a home on the front lawn of Pawnee Bill and May Lillie’s mansion. Shortly before Pawnee Bill died in 1942, he gifted the gun to his longtime friend and publicist Frank Stuart. The carriage was in bad shape and continued to deteriorate as the gun sat in Stuart’s backyard in Oklahoma City for many years. Stuart died in 1950, and under his will the cannon was gifted to the OHS in 1951. The OHS had a new carriage built for the cannon, and has displayed it in Oklahoma City ever since. Now the gun is set to return home to the front lawn at the Pawnee mansion.
The OHS is providing $15,000 in matching funds toward the $30,000 needed to restore the carriage, build a suitable exhibit space, and move the cannon to Pawnee. “This has been a dream of the local community for many years, and we are so excited to be working on plans to make it happen,” said Mona Denney, president of the Pawnee Bill Ranch Association. “We are launching a fundraising drive to raise the $15,000 needed to complete the project. This will be a big attraction for the ranch, and we can’t wait to see it back home on the mansion lawn.”
“We are very pleased to be working with the community of Pawnee to bring the cannon back to the ranch,” said Trait Thompson, executive director of the OHS. “The project includes placing a flagpole near the cannon and lighting the front of the mansion and the cannon display. The cannon will be placed on a concrete pad with exhibit panels to tell the cannon’s story. Also included in the project is a new sidewalk to ensure the display is accessible to everyone,” continued Thompson.
“Come by for a visit and make a donation to the project to be a part of this opportunity,” said Denney. “If you can’t make it for a visit, give the ranch a call to make a donation at 918-762-2513.”
For more information about the Pawnee Bill Ranch and Museum or directions to the site, please visit www.okhistory.org/pawneebill or call the ranch at 918-762-2513. The Pawnee Bill Ranch and Museum is located at 1141 Pawnee Bill Road in Pawnee.