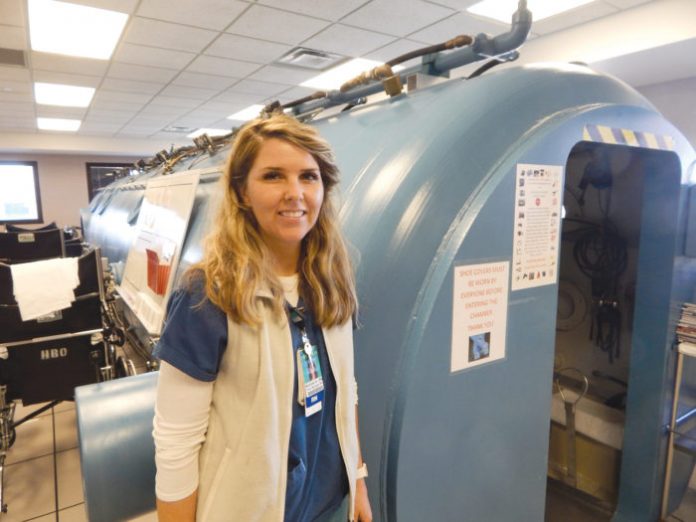 Nichole Harvey loves the critical care aspect of being a registered nurse and team manager for all the burn and wound services of the Paul Silverstein Burn Center at INTEGRIS Baptist Medical Center in Oklahoma City.
“I love the satisfaction of seeing wounds heal,” said Harvey, whose father was former Oklahoma City Fire Chief Alan Benson. “I just felt like it was part of his legacy and I was just attracted to helping people, so that’s part of why I was drawn to this area.”
Harvey has been a nurse for five years since earning her nursing degree at OSU/OKC. She began her career at the burn center working as an intensive care unit tech in 2009. When she graduated as a registered nurse in 2011, she continued to work in the ICU before working in the Boston area of Cape Cod for three years. She returned to INTEGRIS two years ago.
Working at the burn center is interesting with high-profile technology that saves lives such as the large hypberbaric chamber, Harvey said. She is never bored when learning more about helping patients to heal.
“The chamber is actually built for mainly healing wounds, diabetic wounds, people who can’t heal after many, many tries,” she said. “We’ll have emergencies for people, not necessarily their burn wounds — we do that topical. It is actually for carbon monoxide poisoning. So a lot of times people don’t have burns when we put them in.”
The chamber has been used to treat firefighters and carbon monoxide poisoning from people painting inside enclosed rooms with high levels of toxic fumes.
“We put them in here and it helps to get those levels down to normal,” she explained.
One of the more challenging roles for Harvey as a burn nurse is responding to patients arriving in the burn center experiencing acute pain. She wants them not to be in pain but cannot give them so much morphine or other drugs that could stop them from breathing, Harvey continued.
“There has to be a fine line. You have to grow a tough skin to know that they’re going to feel pain; it’s going to be painful, and you try to do the best to make them pain-free as possible,” Harvey mentioned.
She also explains that sometimes pain is a positive indication that nerve endings are beginning to grow back to normal. So she helps educate patients and their families about the road to recovery and feeling better.
“Try to make a positive spin on it if you have to, so they can see past it,” Harvey said.
Years pass and the Paul Silverstein Burn Center has patients come back after they have healed. Harvey loves hearing their stories. One gentleman who lived through an oil fire returned to say how positive his experience was at the burn center.
“It may not have been when he left or during it, but he sees into the future and how glad he was we pushed him,” Harvey said. “That give us encouragement at this level of care because a lot of times we get down, and a lot of the nurses are down, because they feel like they’re not helping these patients. They feel like their patients are not feeling better and they’re sad.”
“So there’s that battle, and when we see them come back and say, ‘Thank you’ — you know it was worth something.”
Nurses help each other by exhausting all of their frustrations by verbally coming to Harvey or another friend on staff. To say it out loud through the process of debriefing helps the burn nurses to cope.
“Sometimes they think they are hurting the patient,” she said.
But being a burn nurse also reaps with feelings of validation by knowing they have benefited humanity. At the end of the day they know they’ve done something that day to help someone, sometime during the day, Harvey said.
“I think it takes a specific type of nurse. I think they need to be diligent, tough in pushing the patients, and being able to stomach a lot of the wound dressing changes, I think is a big aspect,” she said.
The nursing staff is constantly communicating to patients and their loved ones what to expect. What to do when they leave is vital knowledge, she said.
“We actually have an old fire bell from one of the museums donated. It symbolizes back when they didn’t have fire alarms on the truck. They had different bells for ringing they would use to tell everyone where they were in the process of a fire,” she said.
The bell at the burn unit symbolizes a fire is nearly extinguished but work remains.
“Every time a burn patient leaves we have them ring the bell,” Harvey said. “And that says we got most of this done, but you still have a lifetime of work to do in front of you.”
Education helps patients and families move beyond the psychological wound itself.
Harvey is wise to rejuvenate and find joy in life not only at work but during moments of leisure. She especially enjoys spending time with her family and their animals.
“I like art and music; doing things around the house,” she said.