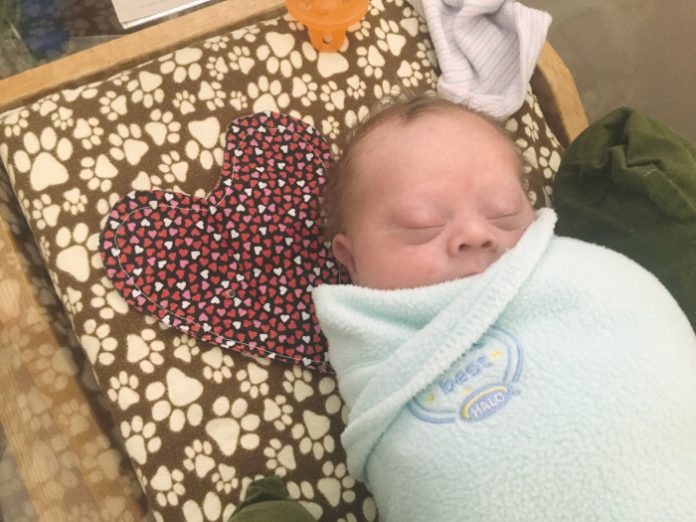 It’s a reality no mother ever wants to imagine; being discharged from the hospital and leaving your newborn baby behind.
That fear became real for Keely Mallory. On Jan. 17, with more than a month left in her pregnancy, Keely gave birth to her first child, Rhett.
“We had a talk the morning I gave birth to him. I told him he was only 35 weeks and that he needed to stay in there, but he was determined to make a grand entrance,” Keely joked.
Keely laughs about it now, but for almost a month she and her husband put their lives on hold to be by Rhett’s side in the neonatal intensive care unit (NICU) at Mercy Hospital Oklahoma City.
They found comfort in a surprising place: a tiny piece of handmade cloth in the shape of a heart. Rhett had an identical heart inside his neonatal incubator. Keely would wear or sleep with hers one night, before exchanging it with the heart in Rhett’s bassinet the next day. “The idea is that the mother’s or child’s scent rubs off on the cloth,” said Mercy Hospital Chaplain, Trisha Wiscombe, who helped implement the idea. “We found through research that scent plays a large role in bonding.”
In turn, the scent of her child may help release a flood of happy hormones in the mother that assist with milk production. For Keely, she said it also helped provide her with a sense of comfort and calm during a time that was often stressful.
“It was a way to have him at home when he couldn’t be,” Keely said. “It was so hard leaving him at the hospital every day, so to just be able to lay the cloth on my pillow at night was very comforting and helped with our transition.”
Each of the hearts is handmade by Mercy Hospital Oklahoma City volunteer Fran Thibedea, who estimates she’s made close to 200 so far. All mothers with children in the NICU receive them. The idea is also in place at other Mercy hospitals in Missouri.
Rhett was discharged from the hospital on Feb. 12. Both he and Keely are doing well.