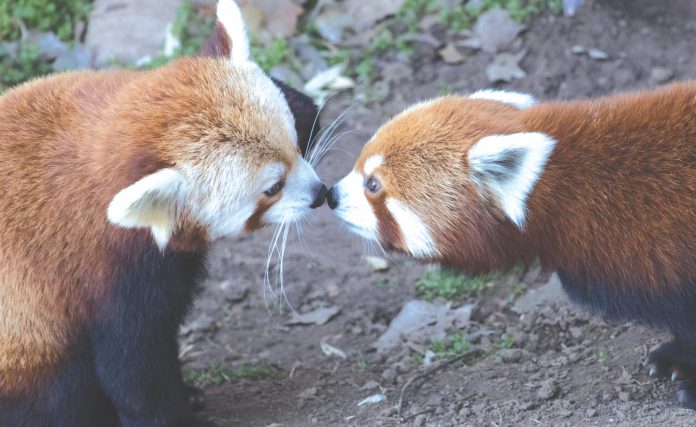 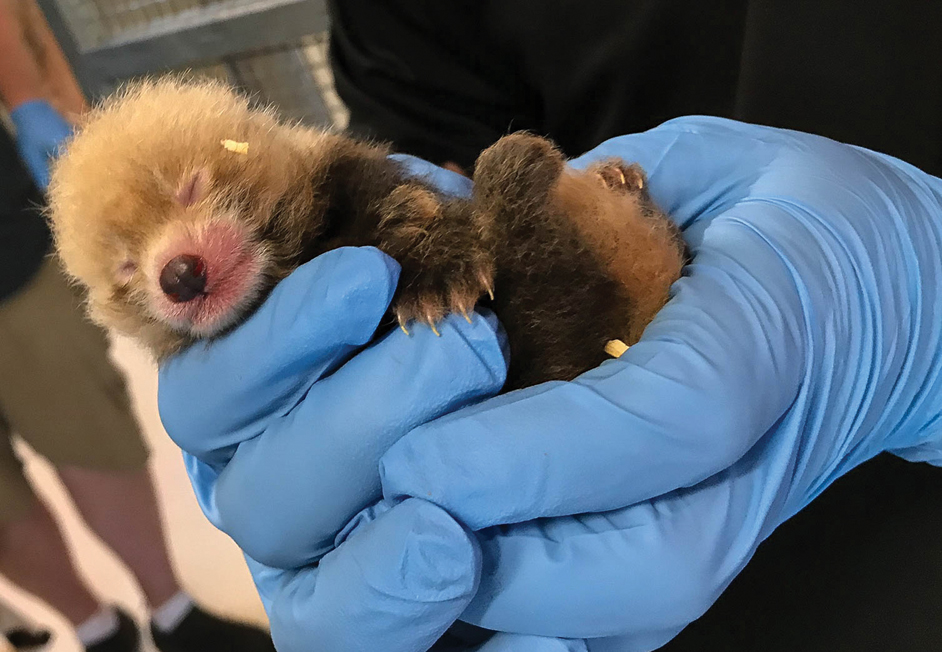 The Oklahoma City Zoo and Botanical Garden is pleased to announce the arrival of two healthy red panda cubs, one male and one female. The cubs were born late in the evening on Sunday, June 2, at the Zoo’s red panda habitat in Sanctuary Asia to mom, Leela, 5, and father, Thomas, 6. Caretakers report that first-time mother Leela is demonstrating appropriate maternal behaviors such as a grooming and nursing her offspring and all are in good health. At birth, the male weighed 119 grams and the female 124 grams (less than a third of a pound). By June 18, both cubs had more than doubled their birth weights to 252 grams (male) and 257 grams (female).
“We are so excited to welcome these adorable red panda cubs to the Zoo’s animal family and are beyond thrilled that Leela is such a nurturing mother,” said Tyler Boyd, OKC Zoo Curator of Carnivores and Hoofstock. “While we don’t yet know when the cubs will be on public view, mom and her offspring are doing well and bonding behind-the-scenes at their habitat.”
Online Naming Contest
The carnivore caretaker team at the Zoo compiled name options for the cubs that are representative of their natural habitat in central Asia. For the male cub, the name options are: Ravi (Nepalese for sun), Tau (Nepalese for handsome) and Jetsun (Buddhist reverend from Tibet). For the female cub, the name options are: Nima (Nepalese for small), Mohu (Nepalese for cloudy) and Khyana (Nepalese for light). An online vote will determine the duo’s names. Voting is open until Friday, July 5 and the winning names will be revealed on the Zoo’s Facebook page Monday, July 8. Cast your vote at okczoo.org/redpandacubs.
About the OKC Zoo’s Red Pandas
Thomas, 6, came to the OKC Zoo from the Virginia Zoo in Norfolk and Leela, 5, was born at the Charles Paddock Zoo in Atascadero, California, in 2014 and moved to the Toledo Zoo and Aquarium in 2015. Their relocation to the OKC Zoo in 2018 was a species survival plan (SSP) recommendation. SSP programs were developed by the Association of Zoos and Aquariums (AZA) to help oversee the husbandry and breeding management and, as a result, the sustainability of select animal species within AZA-member institutions, including the OKC Zoo. Many of these programs help enhance conservation efforts of these species in the wild as well.
Red Pandas in the Wild
Red pandas are listed as an endangered species. Only an estimated 10,000 remain in the wild, and their habitats in remote areas of the Himalayan Mountains, from Nepal to central China, are being threatened by deforestation, agriculture, cattle grazing and competition for resources. In addition to a taste for bamboo, red pandas consume many other types of food including fruits, acorns, roots and eggs. Red pandas grow to be about the size of a typical house cat and have a life expectancy between 8 and 10 years. Their bushy, ringed tails add about 18 inches to their length and serve as a type of blanket, keeping them warm in cold mountain climates. Though previously classified as a relative of the giant panda, and also of the raccoon, with which it shares a ringed tail, red pandas are currently considered members of their own unique taxonomic family—the Ailuridae.
It’s (red) panda-monium at the OKC Zoo! Located at the crossroads of I-44 and I-35, the Zoo is a proud member of the Association of Zoos and Aquariums, the American Alliance of Museums, Oklahoma City’s Adventure District and an Adventure Road partner. Hours of operation are 9 a.m. to 5 p.m. daily. Regular admission is $11 for adults and $8 for children ages 3-11 and seniors ages 65 and over. Children two and under are admitted free. Stay up-to-date with the Zoo on Facebook, Twitter and Instagram and by visiting Our Stories. Zoo fans can support the OKC Zoo by becoming Oklahoma Zoological Society members at ZOOfriends.org or in-person at the Zoo! To learn more about these and other happenings, call (405) 424-3344 or visit okczoo.org.s of the male and female red panda cubs