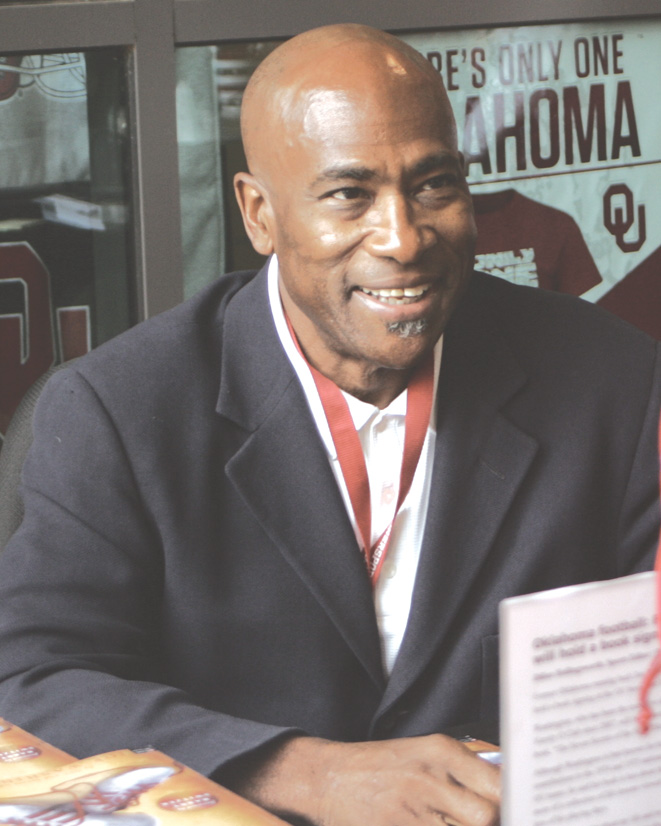 When active people first see athletes playing pickleball the first thing they say is “Can I try it.” That is exactly what happened last Fall when University of Oklahoma football running back legend Joe Washington saw pickleball demonstrations during the Oklahoma State Fair.
Once on the court and swinging a pickleball racket, Washington’s interest grew with each volley, as his first exposure lasted a vigorous 15 minutes.
Washington dresses more formally than some, as he played in the NFL for nine years. But his manner of dress did not stop him that day. The former football star, 65, was so taken with the sport he forgot to take off his sports jacket as he applied his talent as an athlete.
“I had no idea a sport would let you smash the ball like a pro tennis player and yet not be afraid you would hurt the player on the other side of the net,” Washington said recently. “Playing pickleball made me feel like I was a tennis pro while giving me that feeling of being a kid again.”
Many seniors have caught on to the sport as well, as the sport is exploding in popularity. The court (44 by 20 feet) is about the size of the inner third of a tennis court. For seniors this means it is easier to keep the ball in play.
Players get their exercise in each of the 11-point games lasting about 15 minutes because the ball stays in play longer on the small court.
When Washington first saw that he could easily return each volley he stopped a minute and really examined the paddle. The paddle doesn’t have strings. Using a soft ball makes this a low intensity stroke that puts minimal stress on the tendons and muscles of the arms.
“With the serve done underhanded, I could easily concentrate on moving into position to return serve,” Washington said. “The game became easier to play with every point, as learning it is quick and the effort so easy on your arm.”
The demonstration Washington attended was a part of the run up to the Oklahoma Senior Games last year. The Games held in the Fall in Oklahoma have seen a major spike in pickleball participants in the last few years, as more players catch on to the low stress paddle sport.
Nationally the number of places to play has more than doubled since 2010. There are now nearly 4,000 locations around the country on the national associations Places to Play map. On the road to forming the USA Pickleball Association, the sport really started in 1967 when Joel Pritchard and Bob O’Brian played the fledgling game they helped create.
By 1990 all 50 states were roaring with the sound of ball against paddle. This year the USAPA says the sport has seen a 650 percent increase in numbers over the last six years.
Because of its appeal to all levels of athletes, the sport is gaining popularity within community centers, PE classes, YMCA facilities and retirement communities. Growth worldwide is seen in many new international clubs forming and national governing bodies now established in Canada and India.
Washington is a Crimson and Cream football legend. He helped win two national championships as the marquee running back. As a wishbone running back, receiver, punt and kick-off returner he fueled the head-coach-Barry-Switzer-led back-to-back national championships glory days of 1974-75 in Norman.
Difficult to tackle in the open field, he was one of the most complete offensive players to ever play on Owen Field. His nine-year NFL career was also successful, earning him Pro Bowl status and playing time in a winning Super Bowl with the Washington Redskins in 1982.
Then “Little Joe” returned to OU to run the Varsity “O” Association in 2007 for sports letterwinners and has been helping all things OU sports ever since.
One of the smallest and most elusive running backs at 5-foot-10, 175-pounds, he was one of the few players to ever leave the Sooners holding their yards-from-scrimmage record with 4,248 yards. His track-star speed was his ticket to greatness, although he is quick to explain he is proud he was also a spirited blocker when anyone else ran with the ball at OU. Selected consensus All-American and 1974 NCAA Football Player of the Year and later a 2005 College Football Hall of Famer, he is now the author of The Seven Secrets of the Silver Shoes: Principles for Success On and Off the Field.
This year the Oklahoma Senior Games pickleball tournament runs September 27-29 at the OKC Tennis Center at Will Rogers Park with an entry deadline of September 13. Go to okseniorgames.org to enter.
For those active seniors who want to see pickleball played and explained before they try it, the USAPA Web site features many videos on its Pickleball Channel.