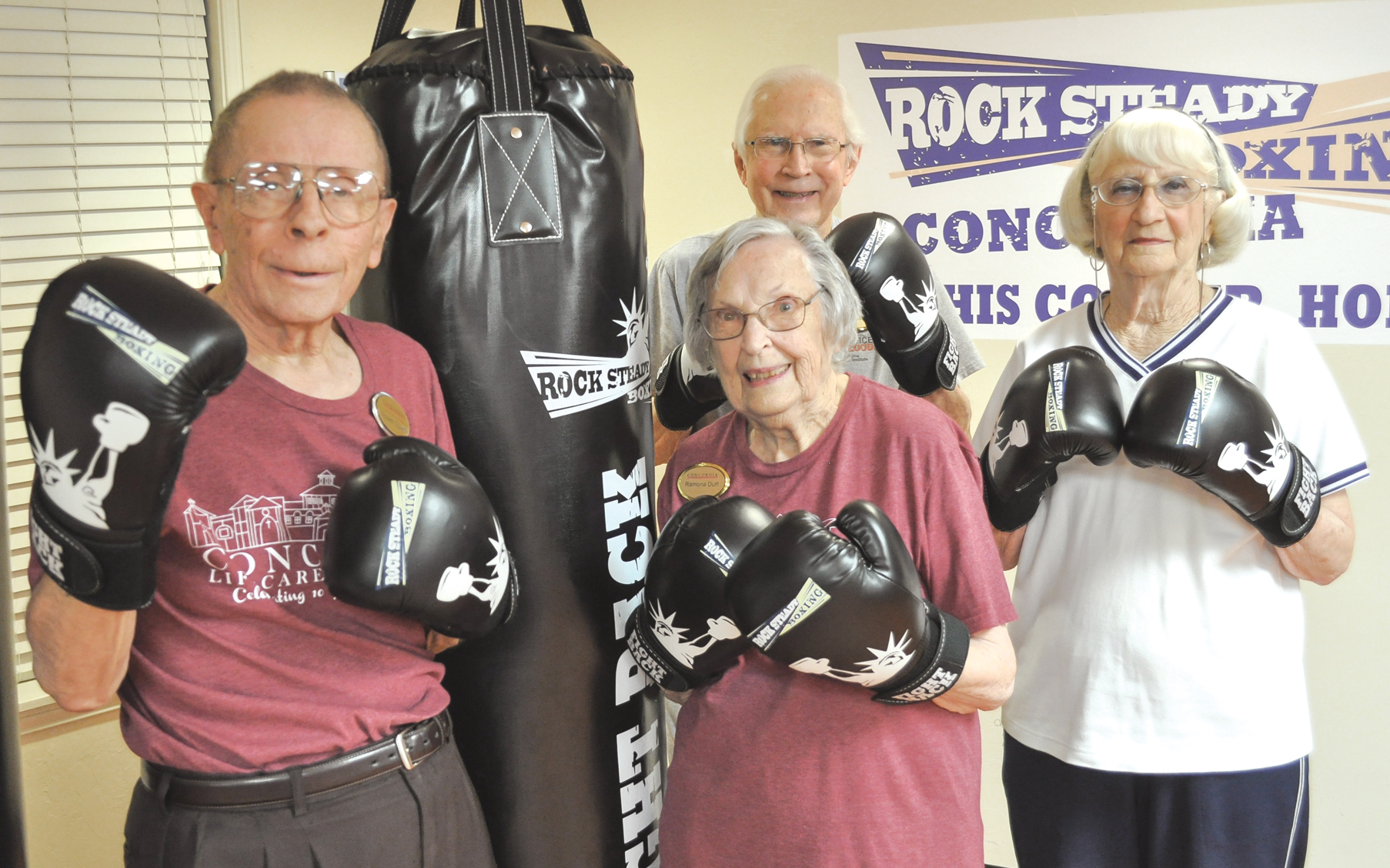 Story and photos by Bobby Anderson

The first rule of Rock Steady Boxing at Concordia Life Care Community is that everyone is encouraged to talk about Rock Steady Boxing.
Resident Ramona Duff says the weekly classes are packed with useful information, stress relief and good, old-fashioned fun.
“It’s really good for balance,” said Duff, who attends Monday and Friday classes. “I had watched other people box and I knew we wouldn’t be hitting each other. It keeps me on my feet longer.
“I like the camaraderie. It’s a great group of people.”
Chris Coleman is the wellness coordinator at Concordia and is responsible for bringing the program to the community.
“We brought it here for the Parkinson’s program and after we got trained in that we realized the same principles could be applied to anyone who wants to reduce falls, build stamina and just be a little bit more active,” Coleman said.
Wednesday classes are open to anyone in the community affected by Parkinson’s. Attendees are encouraged to call first for an evaluation.
“We had to let people know it was just going to be fun and not anything that’s going to be aggressive,” Coleman said.
Concordia’s Dovie Kasper has been coming to the classes since they started five months ago.
“I just love hitting those bags,” Kasper said. “It gets you a lot of energy when you start.”
When she’s hitting the bag Kasper said she may or may not picture a particular face or annoying situation while she punches away.
“It’s good for that, too,” she laughed.
I FIGHT BACK
The Parkinson’s Disease Foundation estimates there are more than one million people in the United States diagnosed with Parkinson’s disease, and more than 60,000 people are diagnosed each year. Rock Steady Boxing is the first gym in the country dedicated to the fight against Parkinson’s.
As word of this unique program spread and the demand for the classes increased, Rock Steady Boxing created classes to meet the fitness levels at all stages of Parkinson’s – from the newly diagnosed to those who had been living with it for decades plus.
“When I think about exercise it’s diversifying the muscles you use,” said Coleman, who obtained Rock Steady certification. “It’s just an excuse to work on a new movement pattern. At the very least it can create new neural pathways. Do what you can but take what you can from the principles.”
SPARRING SCIENCE
Various studies in the 1980s and 1990s supported the notion that rigorous exercise, emphasizing gross motor movement, balance, core strength, and rhythm, could favorably impact range of motion, flexibility, posture, gait, and activities of daily living.
More recent studies, most notably at Cleveland Clinic, focus on the concept of intense “forced” exercise, and have begun to suggest that certain kinds of exercise may be neuro-protective, i.e., actually slowing disease progression.
Rock Steady Boxing, the first boxing program of its kind in the country, was founded in 2006 by former Marion County (Indiana) Prosecutor, Scott C. Newman, who is living with Parkinson’s.
Work done through the Parkinson’s Outcome Project, an ongoing study involving more than 12,000 patients in five countries, suggests that patients should exercise at least 2.5 hours each week to slow decline and maintain a better quality of life. A similar study advised that patients should begin regular exercise at diagnosis.
Still, this research stops short of recommending a specific exercise regimen as a best strategy.
In Parkinson’s, neurons in a brain area called the substantia nigra that are responsible for producing a neurotransmitter called dopamine gradually die off, leading to motor symptoms such as tremor and bradykinesia (slow movement).
Levodopa — which works to increase dopamine levels in the brain but cannot rescue damaged neurons — is currently the front-line treatment for the disease.
Some evidence suggests that, like levodopa, exercise may exert some of its effects by increasing dopamine.
At Concordia, the benefits are evident. Walk into the gym and you’ll see people laughing and smiling, before they even strap on the gloves.
Coleman likes the more intimate environment and says people can let their guard down – pun intended – while raising the level of their health and well being.
“We all kind of laugh at ourselves,” Coleman said. “It’s a camaraderie builder.” 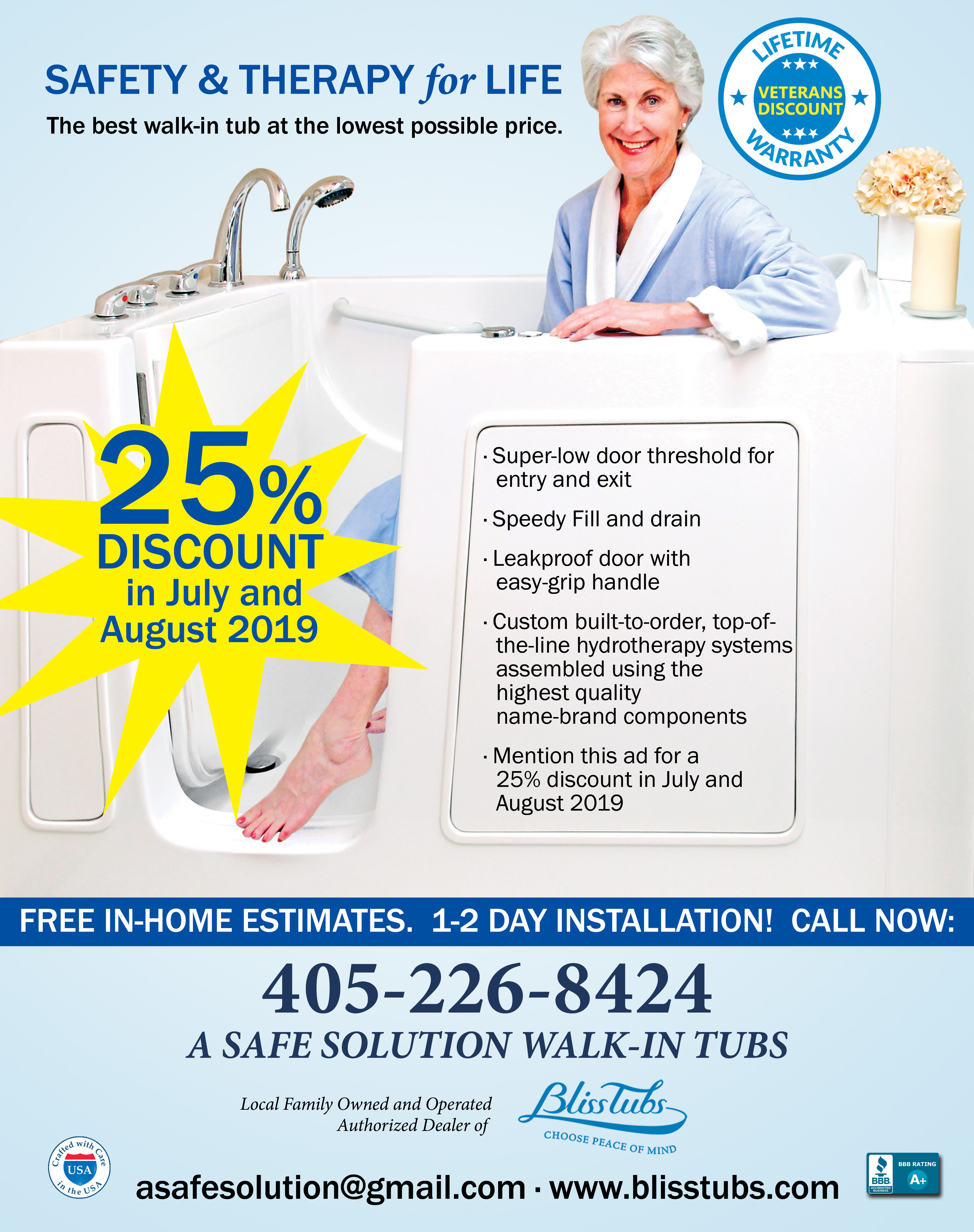