A tremendous response began last fall when Kellie Prather called for pen pals for the residents of Brookwood Skilled Nursing & Therapy on Facebook. Compassion took the form of an overwhelming bevy of letters and cards that continues being sent to residents.
Everyone has returned to the lost art of writing, Prather said. A whole new door opened both for the residents and the pen pals themselves.
“I didn’t realize it was going to go viral,” said Prather, the activities director for Brookwood Skilled Nursing & Therapy in Oklahoma City. “It went viral — it went all across the United States. It was crazy. I’m telling you, we heard from people all over Oklahoma from towns I had no idea existed.”
Letters came from New York, Illinois, Alabama, Kentucky, Arizona, and Arkansas. At one point 300 letters streamed to the residents all at once. Since the end of September, residents posted cards behind their beds and doors in appreciation. One resident has 50 cards from people writing they want to be a pen pal. The nursing staff is amazed at the difference made in the residents’ lives and take part in helping elders decorate their rooms with cards. Staff and residents spend time talking about the pen pals. Nurses and CNAs read the letters and cards to residents who are challenged with their vision.
“I’ve got a pen pal team that’s called the Pen Pal Club,” said Prather, who has served at Brookwood since March and has been with the parent company Grace Living Centers for 12 years.
Residents involved in the pen pal program respond to the letters. Prather said she has never seen such a transformation in the residents who had been mulling over days of depression and routines. Letters come in for the bedridden residents as well. And Prather and her assistants write letter on behalf of those residents who are unable to do so.
“There’s just been such a glow,” she said of the letters from school children, high schoolers, college students, and others who write. Children are given a chance to learn how to write a letter and hear the experiences from elders.
Another program, this time with Zoom is being initiated.
“It’s awesome. They have so much purpose now. My activity room is almost like a mailroom where there’s a working station, a station where letters need to be mailed off, letters that need to be answered,” Prather said.
It’s heard repeatedly that America is divided over politics, but the pen pal program at Brookwood spells unity among people with different backgrounds with the common concern for the welfare of humanity.
“Isn’t it beautiful?” Prather said. “It makes me happy to know that we’re still together. When we get knocked down, we still help each other get back up. And it also makes me really happy that we’re reaching out for our elderly, because they get to be the forgotten society too often.”
Housewives and husbands have been sending not only photographs of themselves, but photographs of their dogs and the splendor of nature throughout the year.
“Everything is so beautiful, and it makes me so proud to be an American. It makes me so happy to know with all the muddy waters of political life, that we’re able to still pay it forward — our kindness to others.”
Residents who have been in lockdown without the ability to see family members or loved ones during the COVID-19 pandemic have their lives touched by strangers who become pen pal friends with many pointes of discussion to stimulate the day with positive messages, Prather said.
“It makes them feel alive; it makes them feel they have a purpose and makes them feel like they’re loved. And it makes them feel like they can extend themselves out to somebody else as well. So, it’s a win, win, win situation.”
The backdrop of Brookwood encompasses Bridges Health, a separate wing for skilled nursing and rehabilitation. Residents are able to focus on their rehab in an encouraging setting.
“We’ve got some excellent nurses in there, case managers and the therapy department is just wonderful,” Prather said. “And everybody works hard around the clock to make sure these residents are getting the skill nursing they need.”
The long-term facility is separate so not to interrupt ongoing therapy. Vending machine carts come through the rooms on a regular basis since vendors do not enter the building during the pandemic.
“We provide room activities as well as hall activities, and group activities when we’re able to,” she said.
Regulated outdoor visits may be scheduled as well as window visits.
“We’ve been pretty fortunate to keep the wheels rolling.” 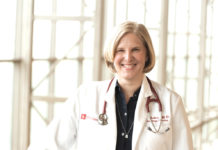 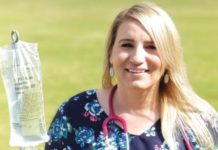 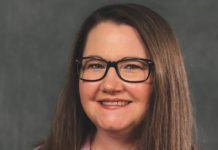