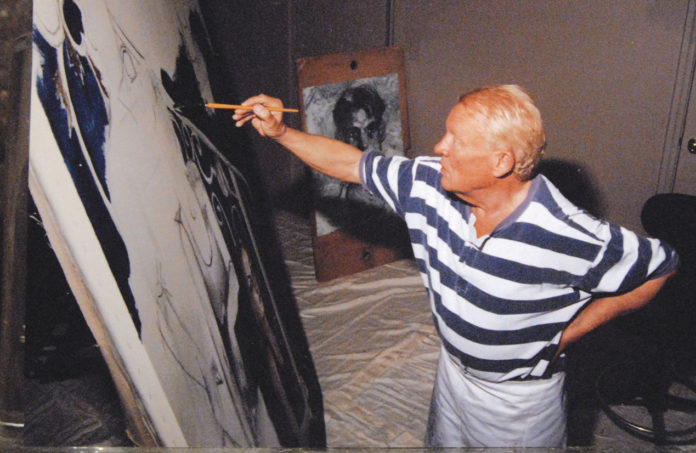 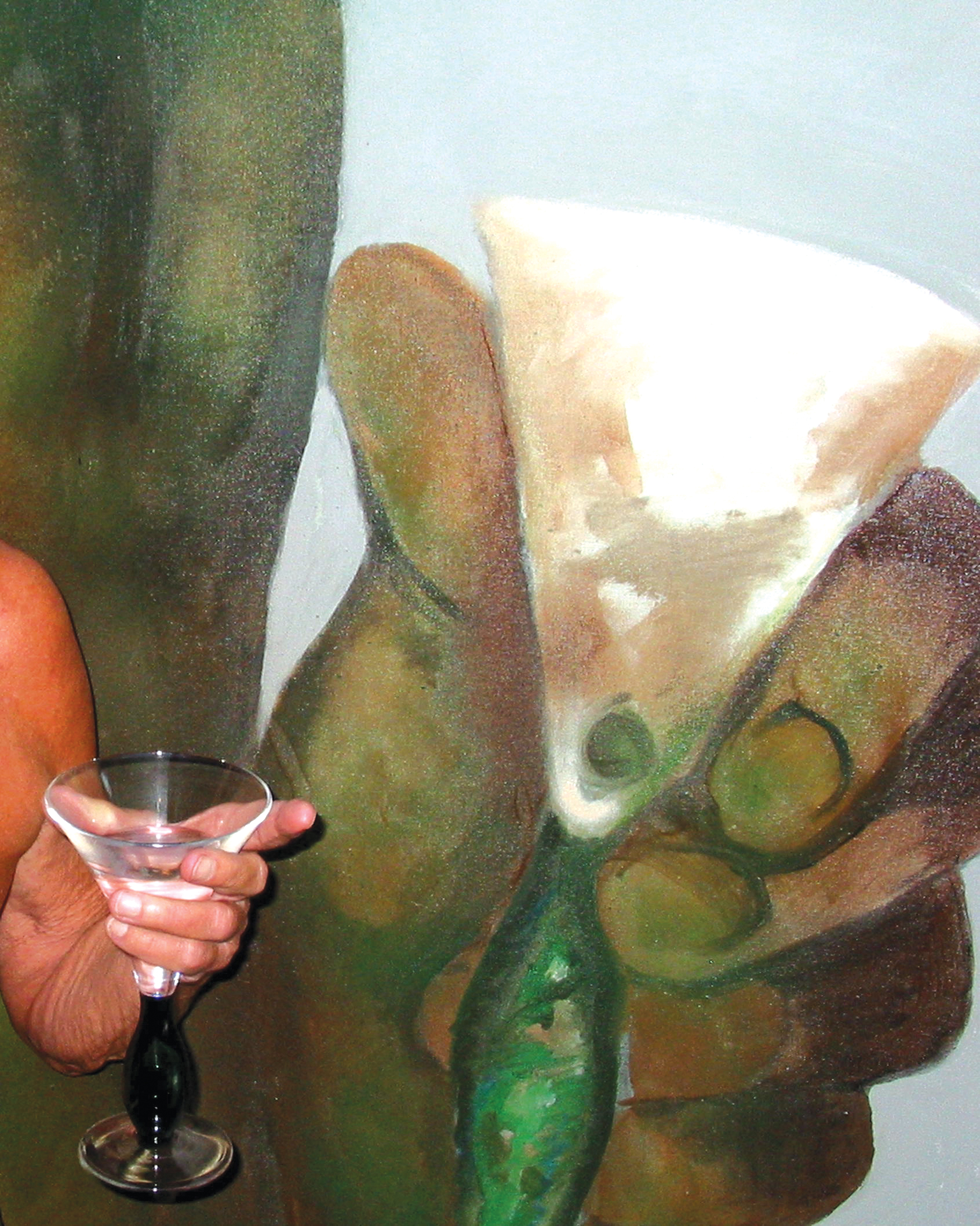 It’s not often that a call goes out for missing paintings from a recently deceased artist. But such is in progress with the Museum of the Red River in Idabel, Oklahoma. Home to the late Harold Stevenson,(1929-2018) The museum hosted a call for his works for display in a retrospective to be held at the museum March 10 – June 7, 2020.
There is a scheduled toast to the Martini cocktail, one of Harold’s social trademarks, at a future reception. In 1995 I was re-introduced to the Martini over a lunch with Harold and subsequently remember Harold with each of my Martinis. http://www.martinitravels.com/philosophy-of-the-martini.html
There is a famous Stevenson painting called “The Eye of Lightning Billy.” In tribute to that you see here my photograph of Harold holding the cocktail glass subject of his “Martini Man” painting made in Wainscott. I have entitled my photo, “The Hand of Harold Stevenson.”
Harold Stevenson was honored with a Legislative proclamation at the Oklahoma State Capitol on the afternoon of April 19, 2017, followed by a public reception.
The recognition came as a result of decades of exhibitions with Harold’s studios ranging from Paris, to Idabel Oklahoma, Key West, and Wainscott, New York. As a native from Idabel Oklahoma, he returned to his beloved community as an example of the circle of life. He returned to his childhood home on Avenue A and subsequently passed it on to his nephew who built him a cabin in the Idabel woods.
In a 1998 Persimmon Hill Magazine interview by M.J. Van Deventer, she writes: “Harold Stevenson was drawing and using colors even before he learned to write his name. “I invented painting all by myself,” he says. Today, he is considered an iconoclast, an uncompromising artist who listened only to his own voice and paints the subjects that bring him the greatest pleasure.”
Stevenson was born on March 11, 1929 in Idabel and died there in 2018. Growing up in Idabel Harold was readily accepted by his neighbors when he asked to paint their portraits which later resulted in a larger than life exhibition of his works titled, The Great Society. With encouragement from the founder of the Oklahoma Art Center in Oklahoma City, Nan Sheets, Harold received education from the University of Oklahoma in 1947, Mexico City College, and studied under Yasuo Kuniyoshi and Max Schallinger.
Decades later his larger than life portraits were accepted into the Fred Jones Junior Museum of Art’s permanent collection accompanied with a monumental exhibition. The Museum recently accepted a collection of Harold’s paintings from longtime friend, Buddy Dugan, from Dugan’s San Francisco’s home collection.
Besides the Fred Jones Junior Museum of Art collection, his works are also in the permanent collection of New York’s Whitney Museum, the Guggenheim, and the Oklahoma City Museum of Art. Besides other exhibitions his reclining panoramic portrait, inspired by actor Sal Mineo, is in the Guggenheim. Of note was his huge painting of Spanish bullfighter, El Cordobes, when it was hung from the Eiffel Tower. Harold is best known for his large canvas paintings, some ranging from six feet by ten feet.
Harold’s contemporaries and acquaintances included artists; Marcel du Champs, Jackson Pollack, Andy Warhol, Poteet Victory and philanthropist Peggy Guggenheim where he visited her at her Venice palazzo. He has been described as one of the art worlds icons with work that spans almost seven decades. He is part of a generation that was once classified by a 1962 art show in New York City as the “New Realists.” With an avid interest in classical history Harold Stevenson’s subject matter includes realistic depiction of classical subjects, Oklahoma cowboys, native Americans, landscapes and an admiration of the human form.
This exhibit of Stevenson’s art at the Museum of the Red River, is a rare opportunity to see a retrospective of a home town artist presented in his home town.
For information on museum hours and of public receptions visit; The Museum of the Red River, at 812 E Lincoln Rd, Idabel, OK 74745 (580) 286-3616 [email protected]

More information on Harold can be found: www.museumoftheredriver.org/harold-stevenson-exhibit-planned-for-2020 or his official website, www.HaroldStevenson.com. 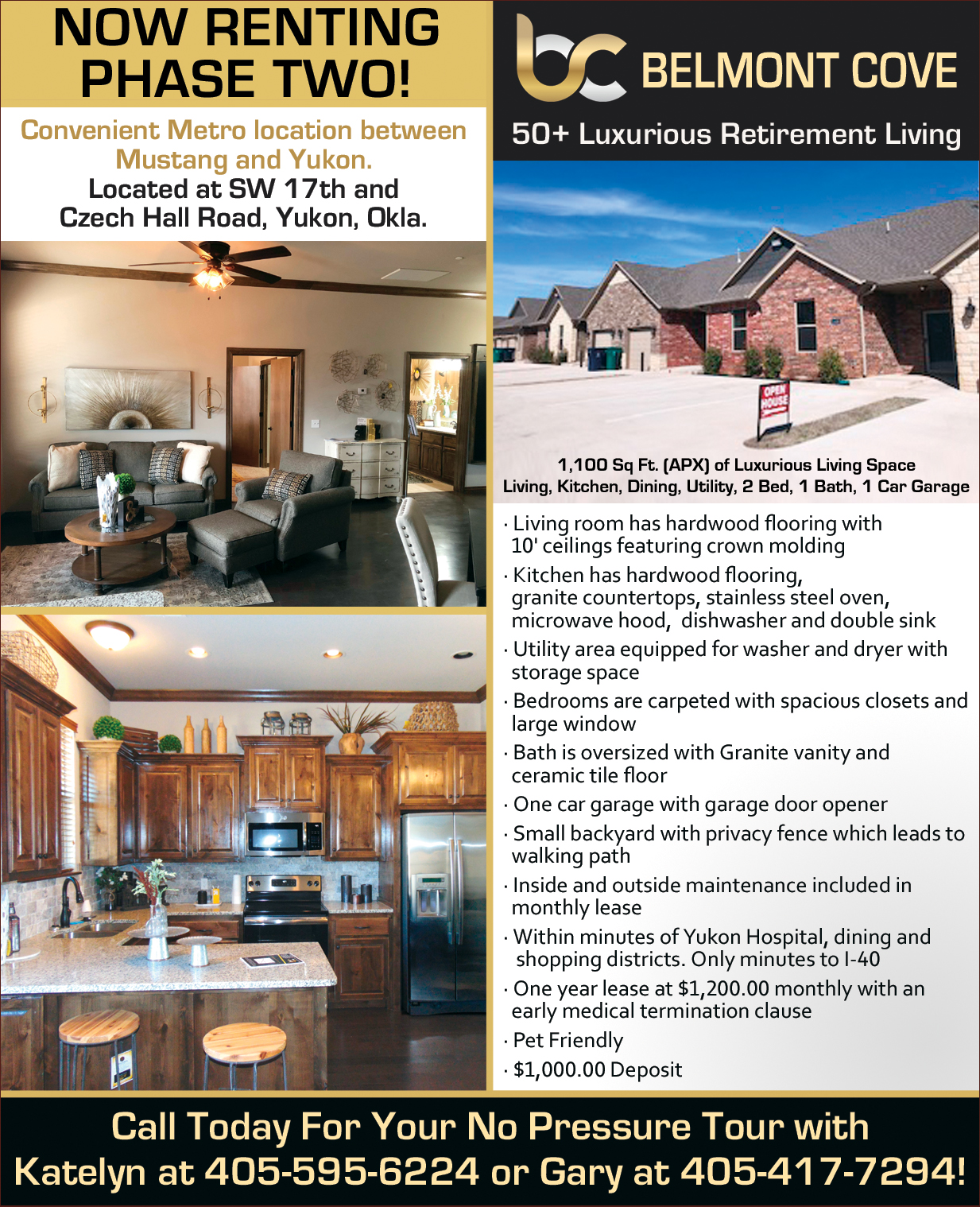