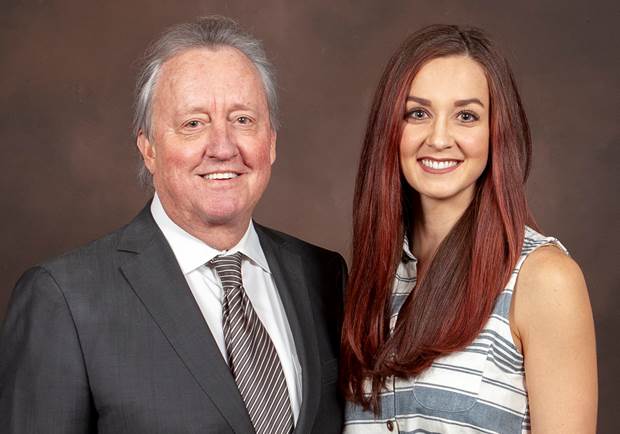 David Kallenberger, M.D., and Crysten Cheatwood, D.O., are physician partners who practice obstetrics and gynecology at INTEGRIS Baptist Medical Center in Oklahoma City. But what makes their partnership so extraordinary, is that they share a professional and personal bond very few will ever experience.
Cheatwood has known Kallenberger her entire life – literally. In fact, he was the one who physically brought her into this world, as the physician who delivered her as a newborn. “I could not have imagined 33 years ago when I delivered Crysten that she one day would be working with me,” admits Kallenberger. “This is indeed a full circle moment for me.”
“He was my grandmother’s OBGYN then he was my mother’s doctor, so I was familiar with his name and reputation very early on,” says Cheatwood. “I can remember being young enough that my mom would make me stay in the changing room during her exams.”
“I also saw Dr. Kallenberger at all of my mom’s prenatal visits when she was pregnant with my sister. He could tell I was curious so he was always asking me questions and volunteering information regarding my mom’s pregnancy. He made it a point to include me in all of the conversations.”
Kallenberger was equally impressed with young Cheatwood. “She made an impression on me at a very young age. She would ask questions that were very inquisitive and profound for a 12 year old. She was always probing for more information.”
Cheatwood remembers being fascinated by medicine and almost obsessed with her mother’s pregnancy. “I attended every doctor’s appointment. I even read the “What to Expect When You’re Expecting” book with my mom. I was completely invested.”
The day her sister, Hannah, was born, Cheatwood was in the delivery room. That is when her fate was sealed. “I was standing with my dad at the head of the bed when Dr. K walked into the room. He said, ‘Crissy… do you want to deliver this baby?’ Wondering if he was actually serious, I nodded my head yes. He said, ‘go over to the sink and wash up to your elbows, we’ll help you with some gloves.’ He told me where to put my hands and then put his hands over mine. And then he talked me through the whole thing!”
From that moment on, Cheatwood knew exactly what she wanted to be when she grew up. She wanted to be an OBGYN just like her newfound idol, “Dr. K.”
“She was a natural,” says Kallenberger recalling her sister’s birth. “She was not shocked, she just jumped right in without question and working with my hands literally delivered her sister. It was an amazing experience. In a way, a doctor was also born that day.”
Cheatwood shadowed Kallenberger several times during high school, college and medical school. She did a couple rotations with him again during her residency training. Now, with her medical degree in hand, she is Kallenberger’s newest partner.
Cheatwood remembers the moment he made her the offer to come work with him. “I was speechless initially, again wondering if he was actually serious. And then I nodded my head yes. It was wildly similar to the reaction I had when he asked if I wanted to deliver my sister all those years ago.”
“I feel like I’ve been shadowing him for 22 years,” laughs Cheatwood. “He has afforded me a tremendous amount of encouragement and exposure. He is a phenomenal teacher and an exceptional physician. I hope to continue following in his footsteps.”
Kallenberger has no doubt that Cheatwood will tread her own path, and is beyond proud of the physician she has become. “It is somewhat surreal working with her but I have worked with her so many times over the years as a mentor or as faculty that it feels natural.”
“I don’t know that this is necessarily a passing of the torch,” continues Kallenberger. “But I do want to groom her to be able to take over my practice one day when I decide to retire. It is comforting to know that someone with her compassion and skill set will be available to take care of my patients in the same way that I have tried to do over the last 42 years.”
Kallenberger estimates that he has delivered more than 15,000 babies in his lifetime. While he says some of them have grown up to be doctors, he says Cheatwood is the first he’s ever had the privilege to call partner.
“The transition we’ve made from student/teacher to colleagues has been interesting and entertaining,” Cheatwood jokes. “A few days after I started here, he told me to call him David now. I still can’t do it without laughing a little bit. I’ve heard people talk about their “work wife” or “work husband.” We definitely have a “work father/daughter” relationship. I have so much respect for him. He’s been such an advocate for me as a new physician. Even though I’m working beside him now, I will always look up to him.”