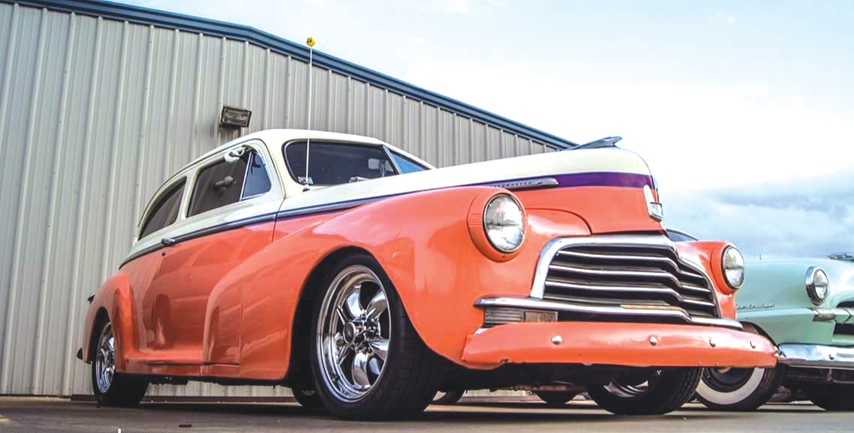 Who’s cruising tonight?
Whether you grew up in the 1950s or the 1980s that simple question eventually led to meeting up with friends along a main stretch of road in your hometown.
That road usually passed by a local drive-in.
A burger and a coke and lots of conversation about school, cars and life usually followed.
But with technology becoming more prevalent, cruising – or dragging main – simply became a lost art.
That was until Covid came along and the original social distancing came back to fashion.
Brian Smith didn’t grow up in Moore. He moved there at the age of 15.
When he was old enough to get behind the wheel he fell in love with the weekly bumper-to-bumper madness that was cruising in his newfound home along 12th Street.
In 2010 he made a page on Facebook – “Bring Cruising Back to 12th Street!!” – as a way to gather both pictures and memories.
“I had lost track of all the car guys,” Smith said. “I lost track of everybody. I didn’t even fathom it would possibly come back. I was just looking for pictures.”
It took him nine years for the page to amass 350 regular followers.
In the meantime, he researched the history of cruising in Moore.
In his research, Smith came upon an old Rolling Stone magazine story.
The story ranked 12th Street as the No. 3 cruising destination in the nation.
Smith believed it.
“I’ve personally met people from the East Coast and the West Coast who have come just to cruise,” he said.
In the late ‘80s the city encountered pushback from residents when it tried to ban cruising altogether.
But Smith always felt that cruising would make a comeback.
And then in April of this year something changed. Maybe it was people beginning to get stir crazy for what would be the start of a long Covid lockdown.
Maybe it was Lori Smith Meyers posting her car club would be going out on a Wednesday night.
Whatever it was ignited a spark.
By the end of that Thursday, Smith’s followers on Facebook doubled.
The page pushed over 1,000 followers the next day and then doubled again the next day.
By the end of that weekend, 4,000 people were interested in reviving cruising in the community.
“It was really, really cool,” Smith said. “It just kept snowballing.”
There were cars coming out that hadn’t been out for decades.”
That first Saturday night in April an estimated 3,500 cars cruised up and down 12th Street. Another 2,500 came the next week.
The sleepy, Oklahoma CIty suburb had gridlock at 10 on a Saturday night.
Smith was in awe.
You could see him smiling ear-to-ear when he pulled up to the local Sonic in his 1963 Ford Fairlane.
He was told stories of guys who had cruised decades before him in legendary vehicles.
Grandfathers began bringing their grandsons after working on their cars.
Guys like Jerry Beard and his 1926 Ford Model-T started showing up.
Mike Jury remembers he used to beg his dad to take him out to Braum’s on a Saturday night just to watch the cars go by.
Now he’s helping Smith’s effort to revive cruising for generations to come.
Smith and Jury put together the “Covid List,” a listing of businesses that were still open in Moore during the pandemic that would be meet-up friendly.
The number of cars grew so quickly that the Moore Police Department got involved, but not in the way you might expect.
“They took my list on their page,” Smith said. “The new police chief gave them a trial run.”
“It kind of made me official.”
“Moore (PD) never told them to stop cruising. They wanted to support it. It was part of Moore’s heritage.”
As the numbers grew – and a few noise complaints – Moore did have to step in and provide some guidance.
Entrances to businesses could not be blocked. All vehicles must be properly tagged and road compliant.
Meyers – now a moderator of the page – says the group has done a good job of policing itself.
Her and her husband own a local garage, one they started after he retired from General Motors 14 years ago.
At 62, Lori Meyers says the movement took off during a perfect storm.
“It’s a freedom to socialize. You feel safe and you’re in the fresh air,” said Meyers, who brings her 1946 Chevy Stylemaster out to cruise. “The Moore community is a good place.”
The interest keeps growing.
By the end of September, Smith’s Facebook page was pushing 10,000 followers.
“It’s insane. The word spreads like wildfire,” he said.
So who’s cruising again?