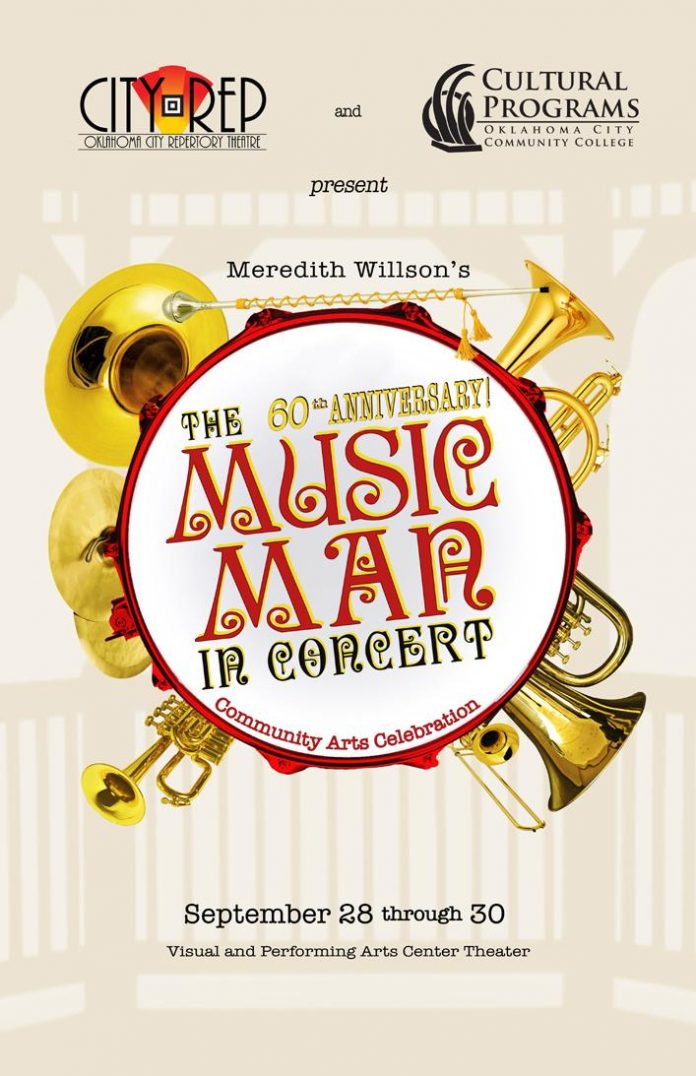 The abundance of theatrical talent in Oklahoma is no secret as it has been exhibited for decades by a number of theaters and venues. The upcoming Concert Version of an all time favorite of Meredith Wilson’s The Music Man In Concert, hosts a number of professional and amateur performers familiar to Oklahoma audiences.
What makes this production, co-produced with Oklahoma City Community College’s Performing Arts Series, September 28 – 30, special, is it’s a community wide celebration, where non equity actors and actors associated with other theater groups, as well as long time Oklahoma performers are brought together with young people from across the community. It’s not only a celebration of the 60th anniversary of this Broadway classic, but a celebration of Oklahoma talent, many of them are senior citizens.
As an active senior citizen, I am particularly pleased to have passed the double open audition process and will be supporting the cast in the ensemble. In a way this is a “Circle of Life” experience as I first began my theatrical roles in the ensemble of Lyric Theater of Oklahoma in 1972. As so many of this cast can, I’m paying tribute to the solid theatrical foundation given by my Oklahoma City University professors, including; Grant Kilpatrick, Mariana Davenport and Florence Birdwell.
This production features Jonathan Beck Reed and Teri Bibb as the unconventional romantic couple of Professor Harold Hill and Librarian Marian Paroo.
Reed, one of Oklahoma’s favorite actors, reprises the role he has played many times, including the 30th Anniversary revival tour all across north America. Having performed the role 504 times, Reed says with tongue in cheek, “I love this show and I love this role, and this time, God willing with the distinguished Harry B.Parker’s guidance, I’m hoping to finally get it right.”
This concert version will be directed by Harry Parker, who is returning to his native Oklahoma City for the occasion, with Musical direction by Dr. Sandra Thompson and choreography by Hui Cha Poos.
Bibb, an Oklahoma native and OCU graduate returns to Oklahoma City and the CityRep stage. Bibb is a highly regarded Broadway veteran, having logged more than 1000 performances of the role of Christine in Andrew Lloyd Webber’s Phantom of the Opera, as well as performing Amalia in She Loves Me on the great white way. Bibb has also given a command performance at The White House and earned a Helen Hayes Award nomination and a Carbonell Award for her performances.
CityRep describes the show as, “..following traveling salesman Harold Hill as he cons the people of River City, Iowa, into buying instruments and uniforms for a boys’ band that he vows to organize — despite the fact he doesn’t know a trombone from a treble clef. His plans to skip town with the cash are foiled when he falls for Marian, the town librarian, who transforms him into a respectable citizen by curtain’s fall.”
This show marks the start of CityRep’s 17th season as Oklahoma’s award-winning professional theatre. Don Jordan, Founding Artistic Director explains that, “THE MUSIC MAN IN CONCERT is part of a new trend in leading American regional theatres. The concept is known as PublicWorks. Introduced by the Public Theatre in NYC in the past 5 years, leading theatres across the country, including the Dallas Theater Center, have begun to expand the concept.”
Jordan says “The idea is to encourage community-wide involvement in the art form. We have reached out across our community to have extraordinary participation from a wide variety of fellow organizations including Oklahoma City Community College, University of Central Oklahoma, The Ambassadors Show Choir, RACE Dance company, OETA, Painted Sky Opera, The 405 Barbershop Quartet, OU, OCU and others. We anticipate the final company will be more than 100 strong, from across a wide swath of our community! This project embodies the Oklahoma “Good Neighbor” spirit.”
Jordan goes on to say that, “THE MUSIC MAN has been one of America’s most-beloved musicals for 60 years, and this unique concert version allows us to all celebrate our love for this classic and to embrace its message of community and of the power of the arts to enrich every life! CityRep’s mission is to serve Oklahoma’s diverse artistic, educational and civic needs by providing dynamic professional theatre. We entertain, enlighten and Inspire! Our vision is to be a vibrant regional theater that is vital to the cultural, educational and economic life of Oklahoma.”
It would be a shame not be charmed once again by the fast talking salesman in this family-friendly, 6 time Tony Award winning musical comedy.
The Music Man In Concert will be performed at the, Visual and Performing Arts Center Theater at Oklahoma City Community College, Friday September 28 and 29th at 7:30pm and Sunday September 30 at 1:30pm
For more information and tickets call: Box Office: 405-848-3761 Direct Cell: 405-505-7828