A single lung transplant in 2010 allowed Enid native Harold Holden to share a funny quip with a large audience in 2017. The National Cowboy & Western Heritage Museum was inducting Holden into its Hall of Great Westerners.
As the first artist from Oklahoma to be so honored, he said “Seems a little strange to be receiving one of my own sculptures here.”
That quip brought a positive response from the audience. They saw the irony in one of the most revered sculptors of horse and rider in the West to receive as his award his own iconic sculpture. What else would the Hall of Great Westerners give their honorees except a small Holden bronze of a cowboy sitting a horse?
In 2009 the world-renowned sculptor and painter of horses and cowboys was not taking on new work. The U.S. Navy Vietnam veteran’s pulmonary fibrosis lung disease was getting the better of him.
Medical experts at the time said it was not advisable to give a 69-year-old a lung transplant. The staff at the INTEGRIS Nazih Zuhdi Transplant Institute at the INTEGRIS Baptist Medical Center in Oklahoma City, said they were wrong.
Conventional wisdom questioned the aging cowboy’s survivability. Luckily the folks at the Zuhdi Institute saw something different. They saw a viable candidate for a lung transplant. They saw a wonderful support network, headed by a devoted wife Edna Mae, and Holden’s vital philanthropic spirit that was busy supporting many of Oklahoma’s worthy causes.
So, from that live saving surgery in 2010 until now, Holden, known as H to everyone, has proven them right. The Western artist has outlived the idea of survivability to become a model of thrive ability as he went on to create some of his largest works as an artist.
And now, at 80, he opens a new chapter in thriving by sculpting three heroic size bronzes to grace the Oklahoma State University campus. These three larger than life statues will round out his total of 25 monuments around the country and be his largest impact on any one location, his alma mater.
Holden sculpted his first bronze statue for OSU in 2012. Only 18 months after his life-changing transplant, he donated his creation of the “We Will Remember” memorial of a kneeling cowboy with his hat in his hands, staring at a black medallion of OSU’s Spirit Rider surrounded by 10 stars.
He donated his design of the plaza with three walls holding the images of the 10 men who died in an airplane crash on January 27, 2001 in Colorado. The images of the 10 men associated with the OSU basketball team have their families’ tributes etched into the same black Indian granite as a memorial at the crash site.
OSU players Nate Fleming and Daniel Lawson; pilots Denver Mills and Bjorn Fahlstrom; broadcaster Bill Teegins; publicist Will Hancock; radio engineer Kendall Durfey; trainer Brian Luinstra; manager Jared Weiberg; and director of basketball operations Pat Noyes died in the crash. Again, Holden donated the rights to create 50 small replicas of the memorial for the families and donors. Now almost a decade after being given a new lease on life Holden is sculpting OSU royalty.
He is creating a one-and-a-half life size bronze T. Boone Pickens, a one-and-a-quarter life size historically correct Frank Eaton (Pistol Pete’s namesake) and a one-and-a-half life size Barry Sanders. OSU’s athletic director Mike Holder has commissioned the series.
Holden still mentions the seven-person team in conversations about his transplant. “To wake up after surgery with a new lung…and essentially be given a second chance at life is overwhelming” Holden said recently.
His gratitude to God and the medical team is memorialized by a six-foot bronze sculpture he donated in appreciation. His “Thank You, Lord” recasting of a cowboy thanking the heavens just outside the INTEGRIS Baptist emergency room entrance was unveiled in 2012.
He has started the Pickens and Eaton pieces, but his studio size will not allow him to do all three together. He hopes to complete the Pickens statue this year and the Eaton sculpture by Spring of next year. The Holdens live on a small 65-acre ranch outside of Kremlin, Okla. His studio is one of the most prominent buildings on the property. He still owns horses and raises cattle, as ranching and riding was the lifeblood of his art career.
“I became a Western artist because I was raised in the life style, riding horses and being a cowboy.” Holden said recently. “Paint and sculpt what you know and I loved everything about the West and being a cowboy.” 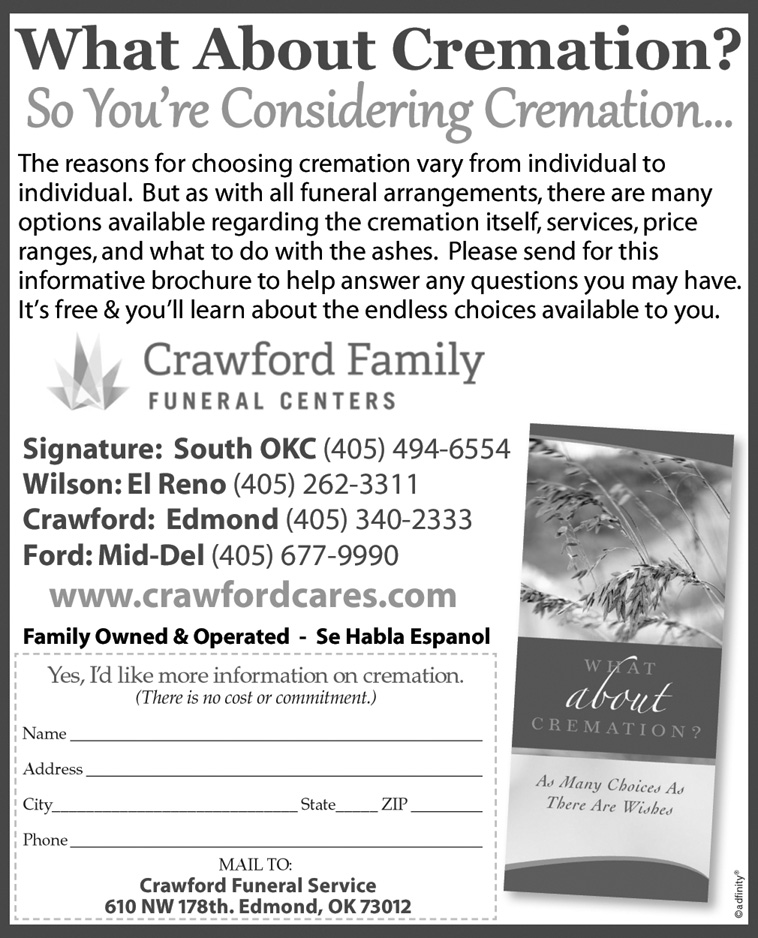