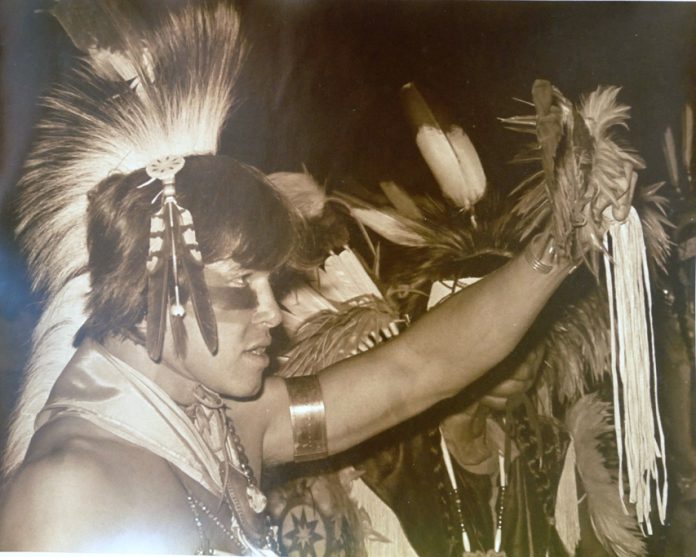 Having recently returned from a trip of a lifetime, in 1980 touring of ancient Egypt icons, I found exotic culture back home in Colony, Oklahoma at the annual Cheyenne and Arapaho Labor Day Powwow.
As I reported in 1981, “Faces of men painted red and yellow, and brown bodies clad in numerous combinations of colors, feathers, and animal skins rhythmically dance out of the dark and into a dimly lit clearing beneath a giant canopy of cottonwoods.”
“Ladies in pure white buckskin proudly keeping in step as their shawls and fringe swing hypnotically in the moon light. Very young braves of 7 or 8 years, dressed in colorful fancy dance dress feathers join in the ways of their elders.”
As a result, I humbly photographically documented the weekend, and returned two more Labor Day weekends to try and capture the thrill and unique authentic Cheyenne Arapaho offering. While most of the dances are held at night, and with the movement of the dancers I could not use dim available light but had to use flash for my black and white negative exposures. The challenge was not to invade or disturbed the reverential dance with the bright flash in the darkness of night, but it was the only way to get an acceptable photograph. I guess I accomplished my goal as I was not admonished for my flash.
This Labor Day Colony’s Native American powwow homecoming continues as it has each year since the end of World War II with added interests. This year the Colony Gallery of the Plains Indian will host two photographic exhibitions of Native Americans proud of their heritage. The Gallery has always encouraged Native American art and artists. The Gallery is reborn with the showing of The Last Powwow ~ the result of my three-year visits ~ and Red Earth Spirit, ~ formal double exposure color photographs made during the Oklahoma City Red Earth Festival. While many of these images have been in exhibitions during the 1980s this is the first time since then that some are on public view. Some have never been seen before as the complete portfolios are too large to mount in one exhibition.
After seeing The Last Powwow exhibition at the Center of the American Indian back in 1983, the then Director of Photography, L.L. Smith, at the National Cowboy Hall of Fame and Western Heritage Center, endorsed the exhibit when he wrote, “I was most impressed with the quality of your work and the dignity of your subjects. Your devotion over the years to this event is quite evident in your work. As a cultural document, I believe certain prints will stand the test of time.”
The renovated petite Gallery of the Plains Indian and the historic town of Colony is a treat to those travelers willing to turn off Interstate 40 at Weatherford and head south.
Justice Yvonne Kauger, a native of Colony, had long wanted a small gallery in Colony to exhibit Indian art and in particular Cheyenne Arapaho artists which would coincide with the annual powwow. The gallery building on the main street was built by her Grandfather, Fred Kauger in 1923 and served as post office until 1960 when it was used for storage..
Through the efforts of Yvonne’s parents, John and Alice Kauger, and family and friends, the old stucco structure was remodeled into a functional art gallery. The gallery had its first showing in 1981. Both exhibits this year are dedicated to Yvonne, John and Alice Kauger and all who help preserve and promote Indian heritage.
“I grew up to the sound of the powwows as a little girl,” Yvonne Kauger explains, “My father was raised by Cheyenne nannies and had a very deep respect for the Cheyenne which he passed on. In fact, until the sixth grade I thought I was Indian.”
In 1984, the Cheyenne-Arapaho adopted Yvonne Kauger as a member of the Standing Bird Clan.
Since the late 1880’s this area has been the tribal land of the Cheyenne-Arapaho Indians. Just west of Cobb Creek, teepees were first erected in a hardy grove and became home and gathering place for the Cheyenne-Arapaho powwow.
Colony’s Mayor Lonnie Yearwood is an active member of the community and an integral part in the rebirth of Colony with restoration projects. One project is the corner building in Colony which is destined to become a museum, and another is the Church Parsonage, a two-story stone structure from 1897.
Mayor Yearwood’s great grandfather John Seger, brought the Cheyenne-Arapahos to Colony to establish an Indian school.
“My great grandfather wanted a post office in Colony in 1896,” says the Mayor, “But there already was a post office west of here, and it was called Seger. If that was not already established the town might have been called Seger instead of Colony, as it was known as John Seger’s Colony.”
The Mayor continues, “Colony has more history than any other town in the county, as Colony started before there was an official county.”
Colony is in a renaissance with not only the Mayors projects but some homes are also being restored, upgraded and preserved. Someday the restoration projects may be on a town tour. The Mayor may be reached by email for more information on the town and the gallery accessibly during the Labor Day Weekend powwow.
Mayor Lonnie Yearwood: [email protected]
Since the authentic powwow activities, dance and singing, continues deep into the night, a planned overnight stay in Weatherford, Oklahoma is recommended.
I plan to be in attendance, not only at the gallery but at the powwow grounds. For a gallery appointment time email me before August 29. I continue my enthusiasm as I reported in my 1981 article, “Had I secretly crept upon this trial meeting on the great western plains of Oklahoma some hundred years ago, I could not have been more excited!”