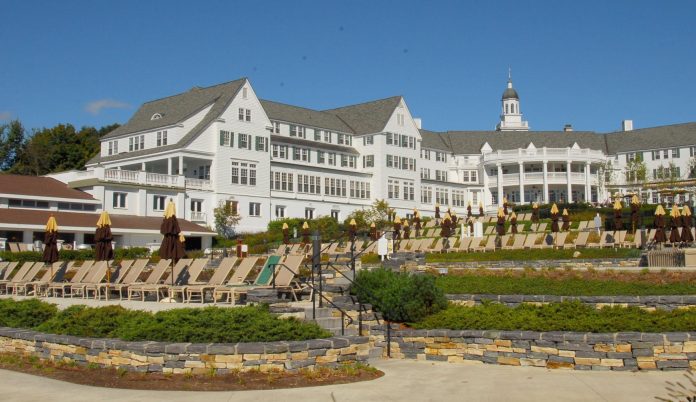 When I visited Albany, New York, I just had to explore a little farther north to the Lake George area. There I found the small town “Festival of the Lake,” in progress next to the southern end of the expansive lake itself.
My home base was the Fort William Henry Hotel with an upper story lake view. It’s so nice to wake up and go to bed with the ever-changing view of water and distant mountains. The hotel offers several styles of accommodations, but staying in the main historic building was optimal, and the prime location for viewing the weekend fireworks over the lake from the room.
I had an unpleasant lunch at the little snack bar café on the waterfront where the manager was almost rude and not accommodating to this paying customer. But with that unpleasantness aside, the rest of my tourist visit to Lake George was very pleasant.
Up the lake side road is the legendary and historic Sagamore Hotel, where you must stop in for a tour or definitely a lunch. The Sagamore opened its doors in 1883 with luxurious Lake George accommodations that attracted a select, international clientele, and quickly became the social epicenter for the wealthy residents of Green Island and Millionaires’ Row. Twice damaged by fire in 1893 and 1914, The Sagamore was fully reconstructed in 1930 through the efforts of Dr. William G. Beckers of New York City, one of the hotel’s early stockholders, and William H. Bixby, a St. Louis industrialist. Together they financed the cost despite the period’s bleak economic climate and The Sagamore continued to thrive, hosting the National Governor’s Conference in 1954, which was presided over by Vice President Richard M. Nixon and Governor Thomas E. Dewey.
A staff member of the Sagamore, suggested I travel, if time allowed to go a bit farther north, to the northern most part of Lake George and visit the Fort Ticonderoga area. I had always heard about this revolutionary war locale and it was enlightening to tour the reconstructed fort and see its importance for guarding the waterfront. Approaching the Park area I came across a fox hunt, complete with riders and hounds in progress, temporarily halting car traffic. It was as if I was transported back in time.
Another dining treat was the Algonquin Restaurant at Bolton Landing, near the Sagamore Hotel, where locals take their boats, docked them by the water front restaurant, enjoy a meal or cocktail, and then retreat to their lake homes via the water, before the sun completely sets. Boating to them is as casual as taking the family car out to dinner ~ so quaint and a hint at the local lake culture.
I enjoyed dining at the very popular Lake George’s Marios Italian Restaurant, and at the Lake George Dinner Theater, where the play was well done and my congenial extemporaneous senior citizen ladies table mates, was more entertainment. The Lake George man street plays host to a number of assorted shops and eateries, including the wine tastings at the Adirondack Winery.
They say you must get on the lake to experience Lake George and the Lake George Steamboat Company fills that order. With several specialty cruises or a casual noon time cruise, you get a different perspective of the Lake and the mountains. Establish in 1817, the Company has been operating on Lake George for over200 years. They offer a number of boats including the Minne Ha Ha, The MV Mohican or the flagship, Lac du Saint Sacrement.817, the Lake George Steamboat Company has been operating on Lake George for over 200
While I was at Lake George in late September, I found I was at the end of their season, so you may want to arrive earlier in the year, go now, or plan now for your spring/summer upstate New York getaway. America and upstate New York has so much to explore and enjoy.
Before you go check out:
www.fortwilliamhenry.com
www.adirondackwinery.com
www.thesagamore.com
www.lakegeorgedinnertheatre.com
www.lakegeorgesteamboat.com
www.thealgonquin.com