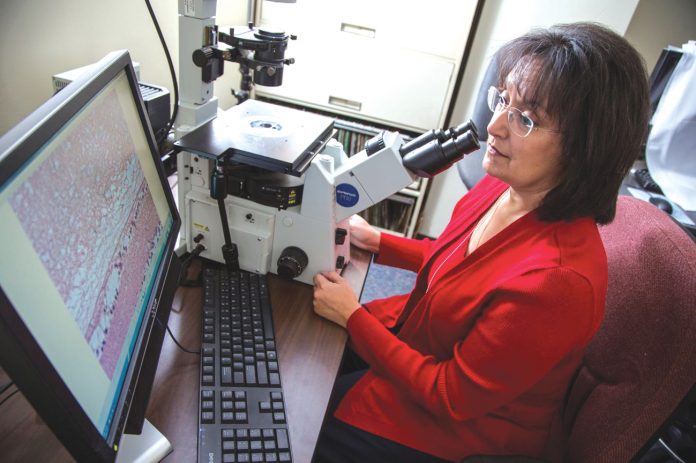 The vision research program at the University of Oklahoma Health Sciences Center and Dean McGee Eye Institute recently received a five-year, $2.9 million grant renewal from the National Eye Institute. Called a P30 Vision Core grant, it supports the work of researchers in 21 laboratories with advanced equipment, sophisticated software, and other innovations to drive research that ultimately will improve the quality of life for patients seeking care for their vision.
Vision research is among the most highly funded areas of investigation at the OU Health Sciences Center. The current grant was originally awarded in 2011 and included several “cores” of specialized equipment available to vision researchers across the campus and at the neighboring Oklahoma Medical Research Foundation (OMRF). The grant renewal expands those cores, giving researchers additional tools to more quickly translate their findings into treatments.
“The amount of this grant renewal is based on the fact that most of our individual researchers hold R01 grants from the National Eye Institute, which is considered the gold standard in vision research funding,” said Michelle Callegan, Ph.D., Director of Vision Research at Dean McGee Eye Institute and Professor in the Departments of Ophthalmology and Microbiology and Immunology in the OU College of Medicine. “Because our vision researchers have been so successful in attracting federal grant funding, we were able to renew this P30 grant, which not only advances their efforts, but helps us to recruit new vision researchers and trainees interested in vision science.”
The grant will also fund the creation of a new core in Ocular Immunobiology, providing researchers advanced methods of analyzing the immunological underpinnings of eye disease. “There is an immune-related slant to every model of eye disease,” Callegan said, “so the development of this core is really important to us.” The Ocular Immunobiology Core will be led by Darren Lee, Ph.D., whose own research focuses on autoimmune uveitis, an inflammation of the eye that is the third-leading cause of blindness in the United States.
Other cores include a Model Imaging Core that allows researchers to analyze visual function and other physiological parameters of eye disease models. The core also includes an emphasis on genotyping to ensure the genetic consistency of research models. It is led by Raju Rajala, Ph.D., whose research focuses on neurodegenerative diseases of the retina. The Cellular Imaging Core provides sophisticated equipment that allows researchers to visualize physiological processes at the cellular and subcellular levels. That core is directed by Michael Elliott, Ph.D., whose research focuses on cellular membranes and how they control cellular signaling in vision.
“The technology in these cores is very expensive. One individual researcher could not afford the equipment that we have,” said Callegan, who leads the overall administration of the grant. “Not only do many different researchers use the equipment, but the cores also facilitate multidisciplinary collaboration between researchers from ophthalmology, physiology, pathology, microbiology and other areas across campus, as well as OMRF.”
Since the original P30 grant was awarded in 2011, vision research has significantly increased at the OU Health Sciences Center and Dean McGee Eye Institute. Nearly 30 research laboratories across the OU Health Sciences Center and at OMRF are focusing on eye diseases, and multidisciplinary collaborations between vision and non-vision research laboratories have flourished. Several new vision researchers have been recruited, launched their own laboratories and gained their own independent funding.
“Many exciting things have occurred because of this P30 grant,” Callegan said. “This funding has provided resources that our investigators otherwise would not have access to, and it has advanced research toward our ultimate goal, which is improving and restoring vision.”
Research reported in this press release is supported by the National Eye Institute, a component of the National Institutes of Health, under the award number 2P30EY021725-11.