story and photos by Betty Thompson 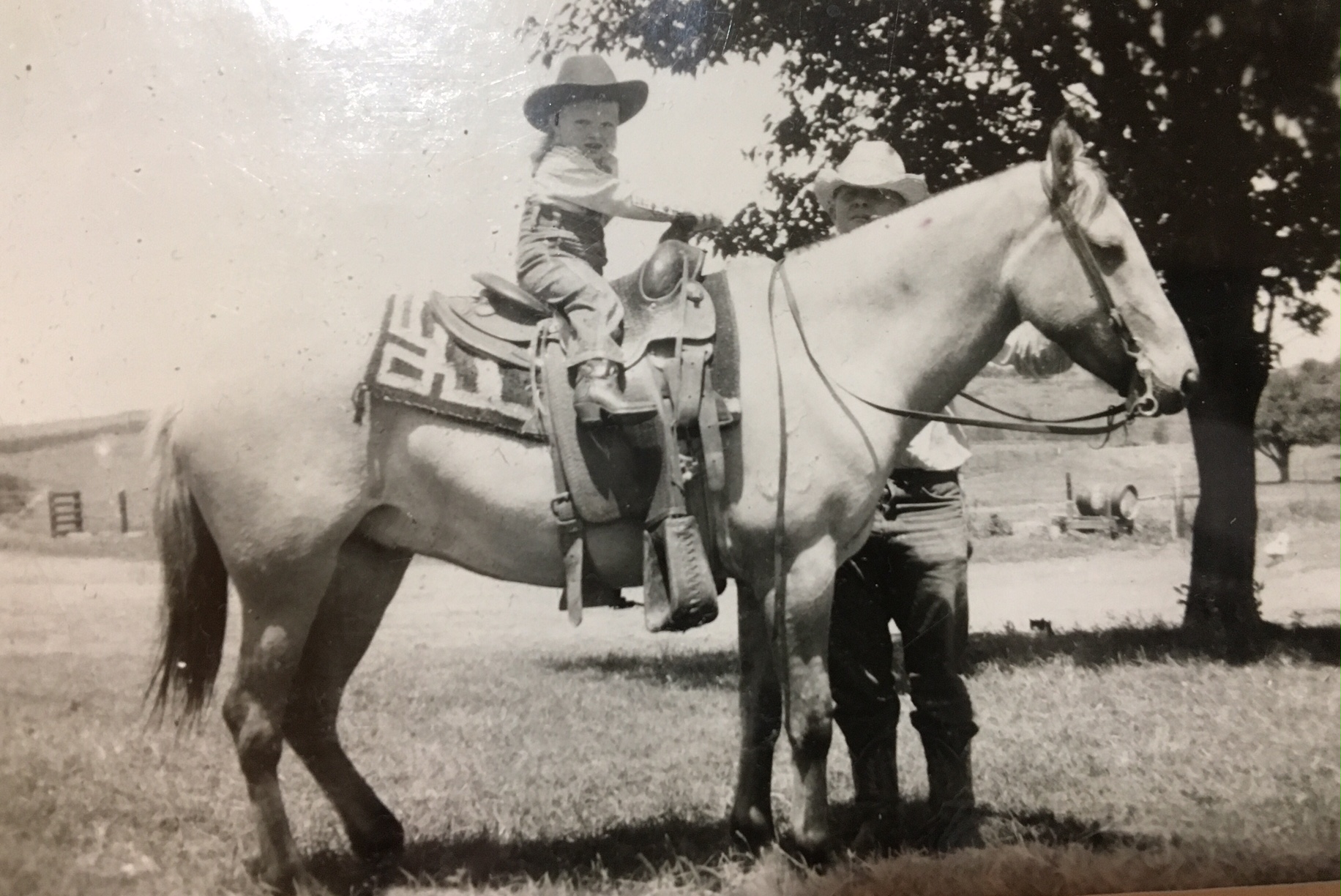 Pawnee – It has been said that a picture is worth a thousand words. The framed photo of young Virginia Norris Rogers sitting horseback, dressed in her boots, jeans, button up and cowboy hat, is no exception. The photo is a mere glimpse of the woman she would become, strongly rooted in agriculture.
“I tell people my outfit never changed, I just buy bigger sizes,” laughs Rogers.
Rogers said she began working on the ranch at a very young age with her father and their long-time ranch hand Albert. She even had a horse before she was born, which she later named “Chicken,” because of his yellow color.
“I was out at the crack of dawn getting cattle in,” Rogers recalled. “We would work until noon or so, and then my dad would go off to auction.”
Her father, Cecil “Whitey” Norris, started trading cattle at the age of 16 and became an auctioneer at age 23. Rogers said he went to an auction just about everyday.
After marrying Avis, Rogers’ mother, in 1933, Cecil bought 160 acres of land and used every opportunity from trading and auctions to buy more land. Together, they built a ranch of nearly 5,000 acres with horses and Hereford cattle.
Rogers is proud to be a fourth-generation farmer in Pawnee County and deeply rooted in agriculture. Family photos and keepsakes fill her walls and shelves, including her parents’ spurs, which hang above the front door. Her grandfather’s brand was the first brand ever registered in the state of Oklahoma and is still used today by her cousin John Henry.
“I think it’s [agriculture] been more fulfilling than shaping,” said Rogers. “It’s hard to describe what’s in your blood. You don’t know anything else.”
Rogers was no stranger to the hardships that ranch life brought: drought, cattle prices, finding reliable help, and more, but her love for ranching never faltered. After marrying her husband Olin, she said “it was just natural” for them to start their own ranching operation, Rogers Ranches, LLC, and have been running the operation ever since.
Rogers and Olin have been married for 42 years and have been running their commercial Angus herd on the farm Olin grew up on since 1986.
“It’s not a lot, but it’s enough to keep us busy,” laughed Rogers.
Busy is an understatement.
Not long after marrying, they bought an insurance agency which they worked while running their cattle operation, and only just sold it in November 2011.
Rogers was also very active in Oklahoma Extension Homemakers, now known as Oklahoma Home and Community Educators, a service designed to provide homemakers with resources similar to the resources farmers receive from the extension service. Rogers served as the county secretary/treasurer under Martha Waters, who was the first woman to be a director of an Oklahoma county extension.
A few years later, she was appointed to serve on the Pawnee County Health Department Board.
Like her father, Rogers and Olin have always been active in the Pawnee County Cattlemen’s Association (PCCA). Olin served as PCCA president in the early 1970s, and Rogers served as president from 2009 to 2011. During Rogers’ time as PCCA president, PCCA became a unified county under the Oklahoma Cattlemen’s Association (OCA). Rogers went on to serve for three years as a district director for the OCA before being elected as the North Central District vice president, putting her on the Executive Board of Directors. She also makes it a priority to be involved in the Oklahoma Cattlewomen’s Association as well.
“It has been very rewarding,” Rogers said. “I love it. Olin and I both enjoy meeting other people and learning about ranches across Oklahoma.”
Rogers was recently appointed to serve as the president of the Pawnee County Economic Development Foundation by the chairman of the Pawnee County Commissioners. The Foundation is actively involved in trying to bring new businesses to the community, and recently awarded a $75,000 grant to the city of Pawnee to refurbish an old building.
In addition to her leadership positions, Rogers writes a column for the local newspaper addressing concerns for farmers and ranchers.
“I just had this wild hair idea one day to start writing about issues in the cattle industry,” Rogers said. “Every now and then I throw in a column about my upbringing, experiences on the ranch as a child, or encourage membership and participation in the OCA.”
If you think she cannot make time for any other commitments, think again.
Rogers also serves as Chairman of the Board for her church, as well as staying busy with four grandchildren and two great-grandchildren.
She attributes this desire to give back to her upbringing.
“I learned early from my family that caring for people was important,” Rogers said. “You have to do what you can for others. I hope to relate to others that agriculture is vital to our state.”
Another important lesson she learned on the ranch is that you can be caring and giving, but also a tough fighter.
Rogers laughed recalling that she woke up to her father saying “Get up boys!” even though it was only her sister and her. Perhaps that oftentimes hard upbringing is what made her so strong when she was diagnosed four years ago with breast cancer.
However, cancer picked the wrong cowgirl. Today, she is cancer-free and proud to be called a survivor.
“I never had a ‘straight path’ in life,” Rogers said, “but I love doing what I am doing now—trying to be one of the best representatives for agriculture I can be.”