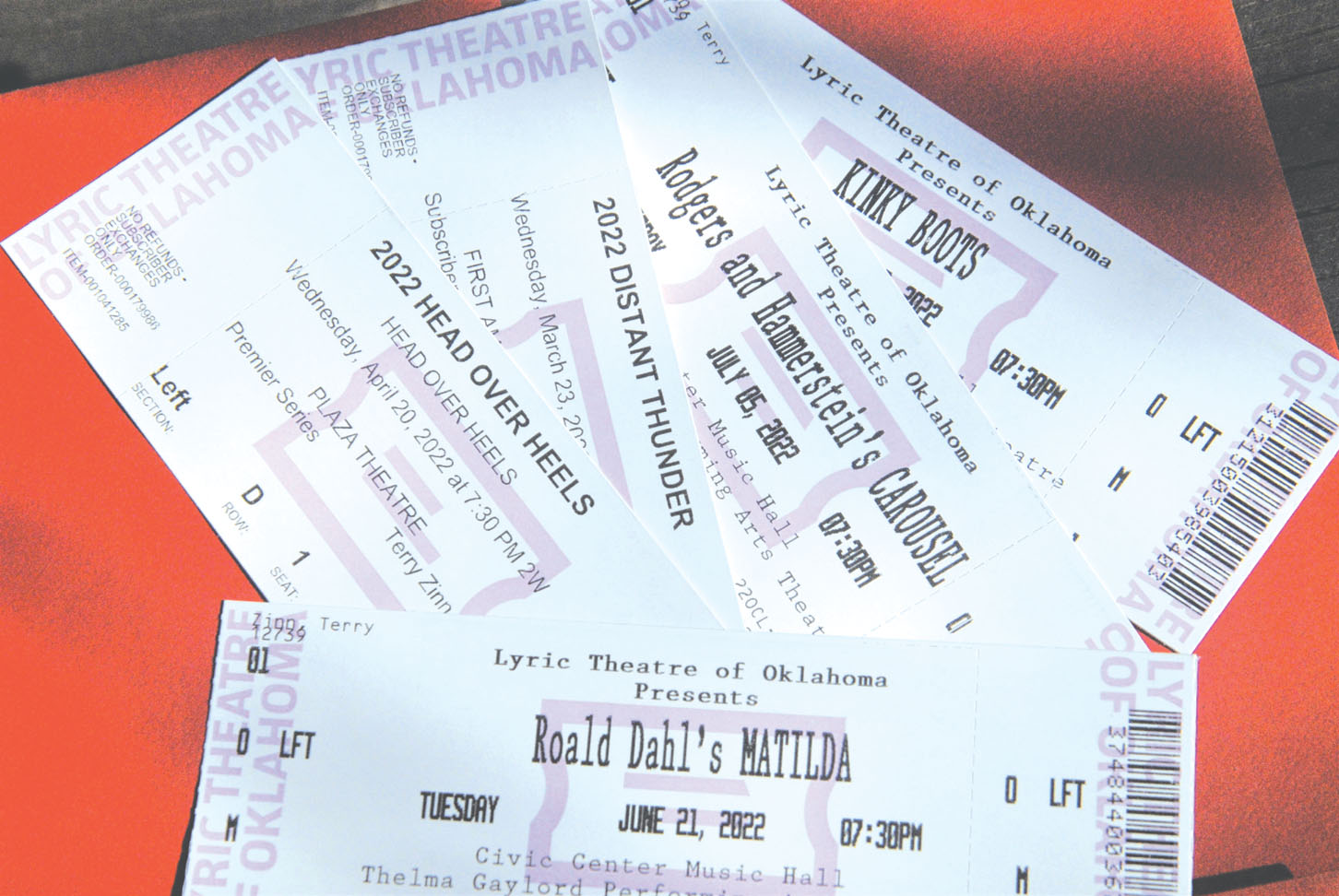 While physical travel is still hindered with virus road blocks, traveling to local theater productions can offer a safe way to escape self imposed restrictions. While Masks and proof of vaccination is needed at the venues, with your K95 or KM95 masks, makes the outing relatively safe. And yes it is a hassle to wear a mask while watching plays and musicals, but it is a sign of our times and should provide a measure of security.
Long time and award winning Lyric Theater of Oklahoma has always offered high quality productions of musicals and in recent years, plays. This season resumes with shows that were postponed because of the virus. Back and rescheduled is: Distant Thunder at the First Americans Museum, starting March 23, 2022; Head over Heels at the Plaza Theater starting April 20; Matilda at the Civic Center starting June 21;then Rogers and Hammerstein’s Carousel at the Music Hall, starting July 5; and ending the summer season with Kinky Boots at the Civic Center Music Hall, starting July 19.
Two extra shows, Rocky Horror Show, and A Christmas Carol, are fall season favorites.
Oklahomans are familiar with Lyric Theater, and long time friends will remember their starting days on the Oklahoma City University Campus, where local talent was nurtured and given a profession venue for the their craft. In recent years Lyric has cast its main leads from tryouts in New York City, bringing Broadway talent to Oklahoma. As popular as ever, single tickets are not impossible to obtain but season subscriptions are needed for securing the best seats and not missing a show in the season.
Lyric Theater describes “Distant Thunder” the musical as: Darrell Waters, a brash young attorney, returns to his childhood home in Montana to broker a deal between a large energy company and the Blackfeet Nation. In the process, he is forced to confront his reclusive father about their painful past. Through a childhood sweetheart, Dorothy Dark Eyes, he rediscovers his identity and feels his perspective shift: his clever business deal will destroy her language school, further erode Blackfeet culture and taint their land. Darrell must grapple with the paradigm of being Native American in America.
The production will be staged at the brand new Native American Center, across the Oklahoma River from the boat house district. First Americans Museum celebrates the shared American history through the collective stories of 39 distinct tribal nations in Oklahoma today. The 175,000 sq ft museum is located at 659 First Americans Boulevard in Oklahoma City. Driving and Parking information along with Ticket Information can be found at: https://lyrictheatreokc.com/venues/first-americans-museum/. It is a world premiere.
Head Over Heals; a New Musical is A fearlessly fresh, new musical mash-up of posh and punk!
Matilda is a Family Friendly Musical.The inspiring story of an extraordinary little girl who, gifted with a vivid imagination and a sharp wit, dares to prove that you can change your destiny despite all odds.
Kinky Boots is an exhilarating Tony Award-winner tells the true story about a struggling shoe factory that will lift your spirits to high-heeled heights!
Carousel is a familiar staple of Musical Theater and this production teams up with Ballet Oklahoma which promises a most artistic rendition of the famous Ballet of the second act.
While Lyric is the premiere Oklahoma theater company you might be surprised to explore the theatrical productions at colleges UCO, OCU, OU, and Guthrie’s Pollard Theater and reinvented City Rep, and Carpenter Square in their brand new venue. Theater abounds in Oklahoma and is there for your enjoyment, when we all can use a little escape these days.